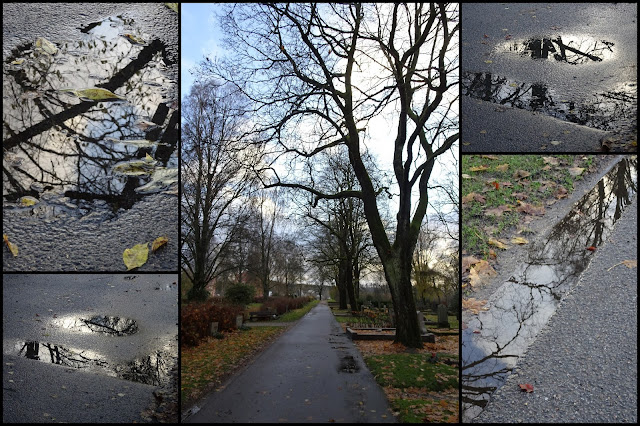 Oops, I just realized it's been over a week since I last posted. If anyone is wondering, perhaps I'd better report that this is because I've been feeling gradually better (not worse). Even my blood pressure monitor seems happy now; so I hope the (new) doctor will be too, when I next speak to her. (Which might be tomorrow, if she's better than the other one at calling as agreed.) The weather has been very novemberish, and I've had a lot of indoors things to catch up with. (And I've got started on Christmas cards to be sent abroad...) I've also been out for walks, but they have mostly been short, grey and wet, and with little to inspire photography. (The photo collage above is from the beginning of the month.)

Alas, the corona situation is getting worse again here, including new restrictions almost every day now. Some restrictions are local now and may vary from one region to another, but yesterday the government  announced that from next week until at least mid December (maybe longer), public gatherings will be reduced by law, nationally, to a maximum of 8 people. Apparently this is as close to lock-down as we can get here, without it clashing with our basic constitutional laws. But it's being made very clear that for the time being, we're really expected not to hang out with anyone except those we live with (or work with, for those who cannot work from home); or in shopping malls, gyms, swimming baths, museums, libraries etc. And when we do have to go shopping, we need to be strict about keeping distance; and shop owners must also make that possible. (It seems people have been getting more careless during the autumn than they were back in spring.)