In a comment to my previous post, Louise in Australia (Twenty Four Seven) asked about “old boots, old people and their boots, wheelchairs and icy paths, and whether these ice creepers are a version of a traditional footwear”…

If you mean what kind of boots were worn way back in the past - like hundreds or even thousands of years ago - I’m far from an expert on the topic; but I think the people who first inhabited the snowy parts of the world wore skins and fur etc tied around their feet and legs – their skills in making boots  developing gradually along with everything else. Later on, in the agricultural society, poor people wore shoes carved in wood (clogs); and in winter there were also boots made from straw.

One must remember that our modern roads and pavements etc can’t be compared to the conditions before motor traffic was introduced. To get around in snow, people used skis and sledges.  Wooden skis have been found in the north of Sweden that were dated to ca. 5200 BC (older than the pyramids of Egypt):

First to develop ice skates, about 5000 years ago, were  the Finns. Originally, skates were sharpened, flattened bone strapped to the bottom of the foot.

Another alternative was snowshoes. The picture below from an old history book (mid 16th century) shows that snowshoes could even be worn by horses:

In my own childhood, back in the 1960’s, I lived in village outside town (not this town, another town; but that doesn’t really matter in this context). Back then, and there, we could still use a kicksled sometimes. 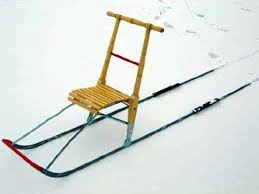 This must mean they did not strew out so much grit after plowing the roads back then. I know mum was able to use the kicksled to the grocery shop sometimes.

Up in northern Sweden I know there are villages where they still use these frequently in winter. Down here, I haven’t seen one in ages, as there are no roads where they can be used.

As for modern day “old people”… First of all, the older I get myself, the harder I find it to define people by their age alone! There are older people who are both healthier and wealthier than I am, for example; but also younger people who are worse off in both respects.

However, generally speaking, old bones are said to break more easily than young ones… Which is why one general recommendation is to use ice-creepers like those I showed in my previous post. (It may be added though, that many young people would never consider wearing them. And for all I know, there may be many “old” people who wouldn’t either!)

As for those in need of walkers or wheelchairs, besides the weather etc I’d say their options depend on lots of factors, like their living arrangements, where they need to go, and what kind of help/ assistance they have (and/or need). Some inner city streets and pavements are kept ice-free by heating (if the winter is not too extreme). In other streets or areas the situation can be totally different. People who have a disability that makes it impossible or very difficult to use public transport are entitled to mobility service. That assessment (like need of for example home care services) is made from case to case. In Sweden we have a basic social insurance system not dependent on private insurances but financed by taxes. (There are still certain fees to be paid by the individual, but the costs are limited.)

Just now the streets here (where I live) are basically snow-free again, after several days of thaw. While up in the north of the country, they’re just now experiencing another really bad snowstorm (even hurricane).

Down here, in the southern parts, the winter weather varies a lot more than up in the north. Some winters we get more rain than snow. Another year it can stay cold and snowy for months. One never knows, so all one can do is just try to be reasonably prepared for “whatever”… according to one’s own circumstances.

Posted by DawnTreader at 22:38