I happened to notice today that my Duolingo app shows a 900 days streak.

Tracing my digital footsteps back to when I got started… yes, it adds up!

It was through fellow blogger Janet that I first learned about the app. (The screen shot above is of a comment of mine on her blog.)

Although I got started on a whim, just to check it out –2½ years later, here I am still, doing at least one lesson of Spanish per day (often more). I have also gradually kept adding more languages to the list. (Something that would certainly never have happened without the convenience of a smartphone app).

The app has gone through some development since I started: for one thing they’ve skipped the original % “fluency” levels, which weren’t very accurate anyway. Further changes in how to level up vs keep up one’s skills have been a bit confusing (and much debated on the app forums) - but I decided not to be too bothered about that, but just keep going. (Have to admit I was relieved when “test out” options were re-introduced again, though – offering the possibility to skip too many boring repetitions of things one already knows.)

The statistics say very little about one’s actual skills; they really only show how much one has used the app for each language.  (Alas they also don’t show when one added each individual language.) A comparison some months apart shows that I have kept practising, though! 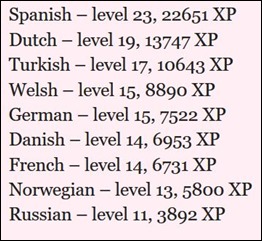 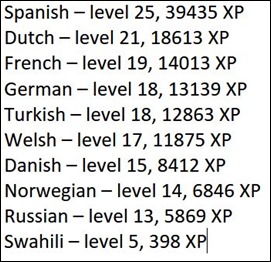 Next to Swedish and English, my third best language is really German; which I studied at university back in the 1980s. I’ve only been using the Duo app to check and freshen up my skills and vocabulary.

The need to freshen up old knowledge has been even more noticable with French; which I learned for five years in school back in my teens, but hardly used at all since then. I still have some “basics” stored in my memory, while other things have obviously withered away…

Norwegian and Danish are a lot like Swedish – we usually manage to understand each other tolerably well, each keeping to their own language (especially Swedes and Norwegians). I’ve just been using Duolingo to increase my understanding of the differences.

Dutch comes across to me as a mix of German, Scandinavian and English. With Duolingo I’ve now learned enough “basics” to read it a little. (Reading Het Achterhuis, The Diary of Anne Frank, in Dutch on my Kindle – now and then, and with my old Swedish paperback copy at hand for comparison.) If I try to speak/write it (outside of Duo exercises) my brain seems to automatically switch to German, though. And I’d probably better leave it a that! ;-)

Spanish is the language I’ve put the most effort into on Duolingo, learning it “from scratch”. Actually rather proud of my progress; even if I know from watching Spanish TV series on Netflix that they speak way far too fast for me, and I’m still totally lost without Swedish subtitles…

Turkish I decided to try because I was curious to see what it was like to learn a language with very different grammar - but without the extra trouble of a totally different alphabet. Similar reasons with Welsh, which I’ve been about to give up on any number of times. But somehow, with both these I still find myself struggling on, one lesson at a time, without even feeling really sure why – except that it’s a challenge, kind of like crosswords! And something like that also with Russian, where even just the alphabet still feels like a challenge. (I’m pretty sure I’ll never be reading the great Russian classics in the original language…)

Swahili (African language using “our” alphabet) I only recently had a peek at, not sure yet if I’ll continue at all… Just a bit curious to get some idea of how it compares to the other languages I’ve tried!

Posted by DawnTreader at 22:21