There is a long-term project going on in my town to create a 5 km long park area all the way through the city, by connecting existing parks with new green areas and footpaths along the river. The idea is for people to be able to walk from one end of the town to the other, along the river and through parks, without traffic. It will take years before it's all finished; but they're working on it. 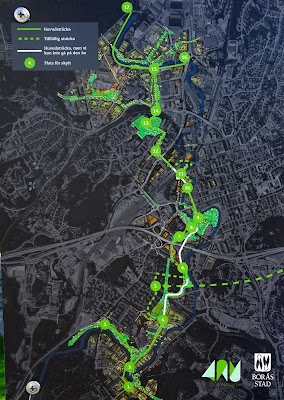 (I've mentioned this before, about a year ago, in a post named Walk a Mile in my Shoes.
On the map, I live in the vicinity of 5, and the city park is at 8/9.)

This summer, they have been working on creating one new passage along the water, under a motorway bridge. Back in mid June, the work was still going on: 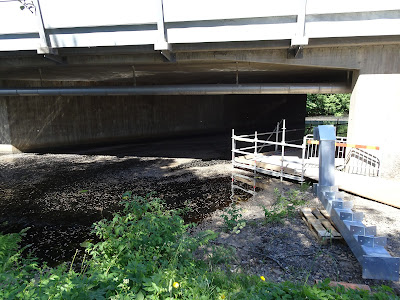 Yesterday, I found that the new footbridge under the overpass had been opened, and people were walking there. So I did, too.

For me, this enables me to walk in park-like environment and close to the water almost all the way into the city centre now - except that I do still have to cross three streets on the way. Cross one street, then walk across the old cemetery. Cross another street, then follow a footpath along the river, including that new underpass. Cross a third street, and then through the town park to the city centre.

Posted by DawnTreader at 14:24