(Continuing from my previous post:)
After having been to see the new sculpture Devil Whirls,  I went down to the park, where I discovered that the fountain in the river had been restored in honour of the jubilee. It's been out of order for a whole year or more, and I've been missing it, so was happy to see it again. 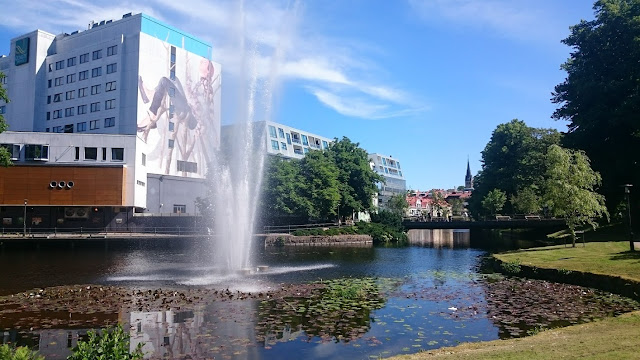 From there, I turned back home again, though (did not go into the city centre). While walking home, I heard an airplane in the air above me, but it wasn't until I was close to home that I looked up to check what was going on. (It's not all that uncommon to hear a plane passing, but more so to hear them circling around back and forth...) 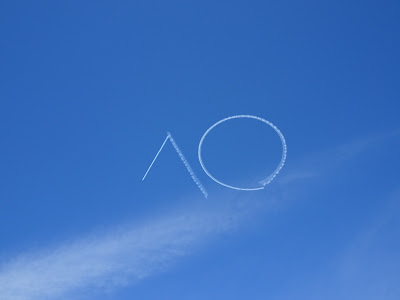 At first I didn't get it.
Then I did. 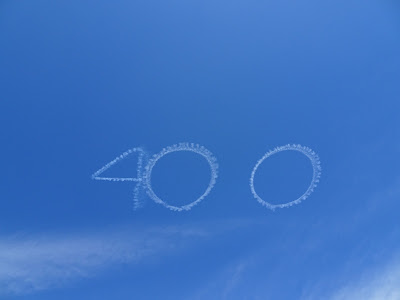 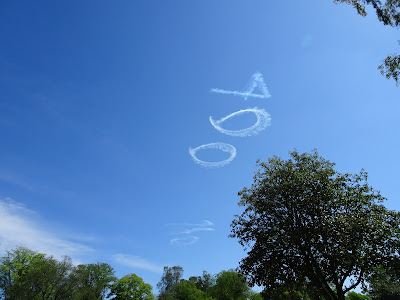 Not sure I approve of the environmental aspect, but visually it was good day for it!

Back home, I watched the official digital celebration ceremony from the park on my tablet, while having lunch. Part of it was sent live from the park; other parts had been filmed in advance. 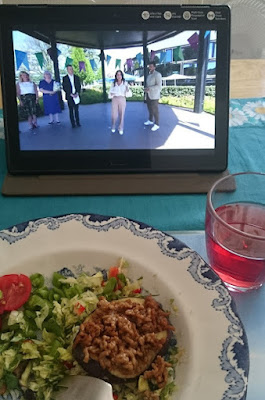 (During my weekend with a broken tooth, "mixed salad" took on a whole new meaning as I pretty much had to run all my food in the blender to be able to eat at all... And on Tuesday, my mouth was still sore...) 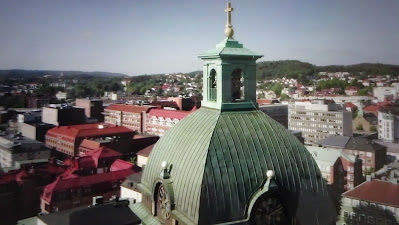 A fanfare was played from the top of the tower of the 17th century church. 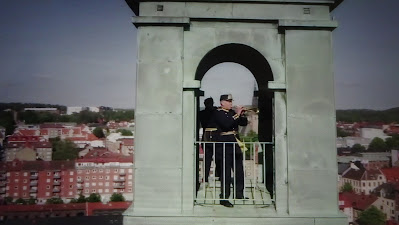 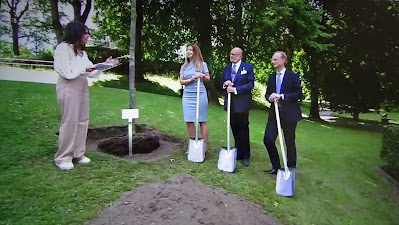 A new tree was planted in the park 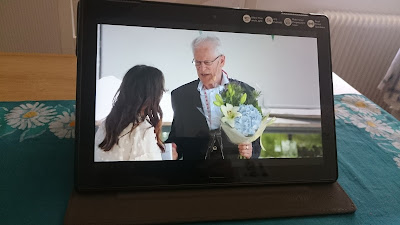 Every year on the town's birthday, they also appoint a new "ambassador" for the town for the next year - usually someone already nationally well-known. This time a former prime minister (Ingvar Carlsson) who was born and grew up here. (Follow the link to Wikipedia if you want to learn more about him.)

Speaking of former PMs, we're still in the midst of the national political crisis which I tried to explain here (21 June). After the parliament voted for no confidence in our PM (Stefan Löfven, leader of the Social Democrats), he had two options: Either to call a snap election himself, or leave it to the Speaker of the Parliament to try and seek another solution. The PM chose (on Monday this week) to step down and leave the process in the hands of the Speaker (while continuing to serve as interim PM, pretty much as before).

The Speaker then (quite according to practice) handed the 'ball' to the leader of the biggest opposition party, the Moderate Party. Meanwhile, one of the old government's support parties, the Liberals (at present a very small party) has declared a change of standpoint and joined the opposition. But at the same time, the Left (who kind of started the no-confidence thing) again declared they'd rather see the old PM back than the right-wing alternative. The balance hangs on one (1) vote in the parliament (175-174) but the leader of the Moderate party today declared that he does not seem likely to be able to win; and thus the 'ball' has now once again been handed back to the old PM to continue negotiations with those that still support him; and report back to the Speaker on Monday. They know how to keep the country in suspense...!

Posted by DawnTreader at 20:58