Once Upon A Wardrobe (Book Review) 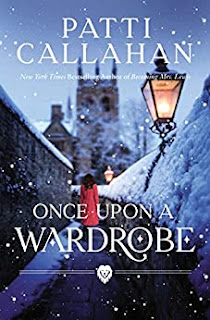 Once Upon a Wardrobe
by Patti Callahan (2021)

I loved this book, which manages to combine fiction and biography (of C.S. Lewis) in a rather unique way. Having read biographies about Lewis before (you know I'm a Narnia fan, and I have also read several other books both by and about him), I recognized a lot of details, and throughout the book I felt that Patti Callahan captures 'Jack' (as he preferred to be called by his friends) as a person very well - and also his brother Warnie.

The other main characters, including the "narrator" Megs, are entirely fictional, though - and so (obviously) never met the Lewis brothers in real life - although that is almost hard to believe when reading the book.

The story is set in 1950, when The Lion, the Witch and the Wardrobe, the first book in the Narnia series, was first published. Megs Devonshire is a student of mathematics and physics at Oxford. She has an eight-year-old brother, George, who is sickly and pretty much bound to his bed. He is given this book, and gets deeply fascinated by it. He also gets obsessed with questions like where Narnia "came from" and if it's "real". Knowing that his sister studies at Oxford, and that Lewis is a professor there, he asks her to find out for him.

As Megs is not a student of literature, but of science, she struggles to understand her little brother's more philosophical questions. She is also hesitant to approach the famous author, as he is not her teacher. But eventually, she ends up doing so anyway - and this leads to a series of meetings with both C.S. Lewis himself, and his brother Warnie, in their home. Somewhat to her frustration, rather than answering direct questions with straight forward explanations, Lewis chooses to just tell her "stories" from his own life, though. About his and his brother's childhood and youth, and the literature he read, etc. After each session, Megs writes down these stories in a notebook, and when she goes home to visit her brother, re-tells them to him. George also has a habit of sometimes hiding in his own wardrobe to sit there and "take himself to that imaginary world, where he can have his own adventures, where he can escape the very real world, where his body won't get old, and where his mum doesn't cry in the kitchen". And when his sister is home and reporting back to him from her talks with Lewis, instead of just the ordinary "once upon a time", they fall into the habit of starting each reading with the phrase: "Once upon a wardrobe, not very long ago, and not very far away". Rather to Megs surprise, her little brother seems to get the significance of the stories about Lewis's life, related to his book, better than she does herself. But gradually, she also finds her own understanding deepening. George's illness, and his way of handling that his life in this world will probably be short, makes it all too obvious that not all the questions in life can be answered by math and science.

In the midst of everything, between worry about her brother and wrestling with life's Big Questions, there is also room for a bit of romance in Meg's life.

All in all, it's a warm and beautiful book, and I'd gladly recommend it to readers of any age as introduction to both the world of Narnia and the life of C.S. Lewis.

At the end of the book, there is also a note from C.S. Lewis's stepson, Douglas Gresham, saying (among other things): "This is not merely a book worth reading, it is a book that will drive us through the difficulties of love and sorrow, to struggle, gasping onward and upward, our emotions surging with us until we are brought, once again, to love. --- For while it may not be Narnia, there is magic in it, and that deeply moved me."

Posted by DawnTreader at 16:19