After a quiet Easter weekend, this morning I was awakened early by a lot of banging outside. I still felt tired though, and as I knew the noise had legitimate cause (roof work on the building), I stayed in bed, turning the radio on. Somehow I must have fallen back to sleep (slumber) again, because next time I woke up (which I wouldn't have done if I'd stayed awake!), it was from a rather chaotic dream of being in a war zone... No need for advanced interpretation of why - with the war in Ukraine constantly on the news, the last book I read being about WWII, and now this going on outside my windows: 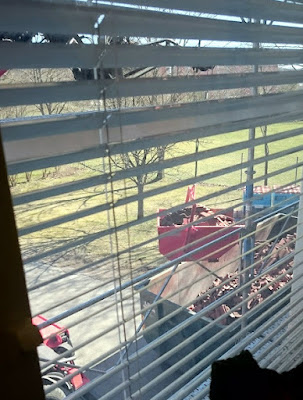 They've spent today stripping the roof of the old tiles, throwing those in a 'small' (well...) metal container up on the roof, which was then maneuvered down from there by a huge crane outside my windows, and (noisily) emptied into HUGE metal containers on the ground... They filled at least two such huge containers today.

Meanwhile, on the other side of the building, they were putting up some more scaffolding (involving other banging and drilling noises).

It's been a lovely spring day outside, but what with that crane swinging heavy containers in the air outside our entrance most of the day, I ended up not going out until they had stopped... (No doubt they would have "let me out" safely - but since I had no special plans anyway, I just found it better to wait!)

I got some vacuuming done - trying to cancel out one kind of noise with another. I also cleaned my winter boots (I have several pairs, high and low and with different kinds of soles) and took most of those down to the basement storage room. (Hoping we won't have more snow now - even if one never really knows!) Then I ended up watching TV most of the afternoon until 4 p.m. And then I went out for my walk...

For once, I think I'm quite happy with 'daylight saving time' this spring after all. ;)

Remains to be seen what tomorrow will be like. The degree of noise (and mess) is likely to vary quite a lot depending on what they're up to at the moment - it's just a bit hard to predict from day to day, especially since they're working on more than one building simultaneously.

Posted by DawnTreader at 20:02