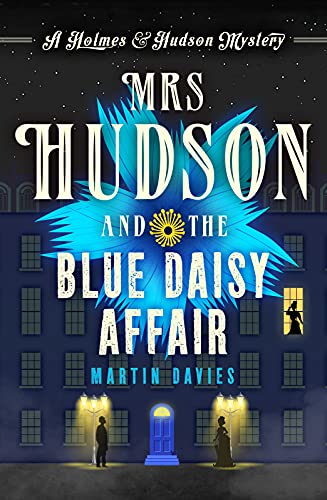 Mrs Hudson and the Blue Daisy Affair
(A Holmes and Hudson Mystery, book 5)
by Martin Davies

I've read and reviewed the previous books in this series back in 2016 (1-3) and 2020 (4). By now I've got quite used to, and even fond of, Davies' version of Sherlock Holmes - where mysteries are solved not only "upstairs" but also "downstairs" at Baker Street. While in the original stories Mrs Hudson was Holmes' and Watson's landlady, in these stories she is their housekeeper, who also has help from a maid, Flotsam (Flottie), whom originally she took in as an orphan. With time, Flottie has matured and has become almost as much of a sleuth as Mrs Hudson. They are by now both often taken into the confidence of both Holmes and Watson - and Flottie is even gaining a reputation on her own as trustworthy, by certain clients.

In this book, Holmes and Watson have more work going than they can handle.  Things get complicated when on top of other urgent cases they are asked to both protect a radical politician, George Dashing, against a suspected plot by Russian assassins; and investigate a murder for which Dashing's political rival Sir Henry Catanache is suspected. In the midst of it all, Holmes also suddenly seems to be getting competition from a mysterious new detective in town, whose name is beginning to turn up more and more frequently in the London newspapers: Laurence Martin. Flottie starts out helping Holmes and Watson to look for suspicious ads in the newspapers (that may contain coded messages) - and her own involvement in things escalates from there...

It all gets rather entangled, and the reader can expect some surprising twists and turns before things finally get sorted out.

I'm rather looking forward to another installment in the series coming up in November.

Posted by DawnTreader at 11:00