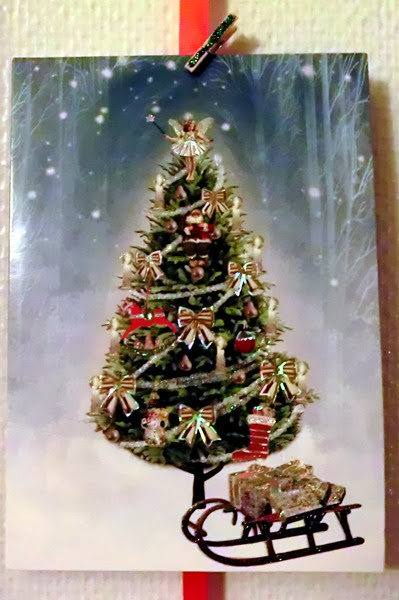 The first Christmas card arrived yesterday (from a friend in England who is always early with hers). One thing led to another… I decided I might just as well put up the red ribbon to hang it on. (I started a new ‘tradition’ last year – if it can be called a tradition after only one year! – to display Christmas cards in the doorway between my living room and study, putting them up as they arrive).

Having done that, I decided I might as well also turn on the fairy lights on the balcony that I put up earlier in the week… (So what if some people might think it’s a week too soon?)

Today I changed the curtains in the kitchen – another of those things I like to get done before 1st Advent. For those who don’t know: It’s very common in Sweden to change curtains in the kitchen for Advent or Christmas. (Some people change them in other rooms too, but if you only do it in one, it’s usually the kitchen.) As mine are not “too” Christmassy, just chequered in red and white, I usually put them up mid/end November and keep them up until the end of February.

I think it’s to do with the darkness and cold and the lack of colours in nature here in winter, that we long to surround ourselves with candles and warm colours indoors instead. Anyway I feel that’s how it works for me.

Now I’ll try to restrain myself until the end of next week to start putting up the electric candles and/or stars in every window. :)

Posted by DawnTreader at 20:06