The Opposite of Fast Food 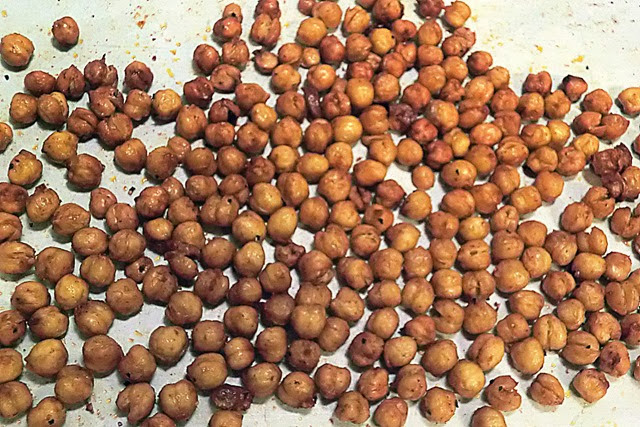 Every now and then I cook chickpeas (garbanzo beans)  to use in salads. On Friday I tried for the first time to roast some for snacks. They came out quite good, could perhaps have been a bit crunchier (although for my teeth probably crunchy enough!) – but as I said, it was my first attempt. There are lots of various recipes to be found on the internet so if you want to try it, I suggest googling to find one that looks good to you.

The recipe I tried was in Swedish. Put 3 dl (~1 1/4 cup) of boiled chickpeas (dry them the best you can first) in a bowl with a mix of 1 tablespoon oil (I used olive oil with lemon), ½ teaspoon salt, ½ teaspoon paprika powder and 1/4 teaspoon black pepper. Stir. Spread the peas evenly (single layer) on baking paper on an oven tray. Roast them at 200°C (400°F) for about 30 minutes. (Check on them a couple of times and shake/stir them a bit.)

If you do them from “scratch” as I did, they’re absolutely the opposite of fast foood, as it took me about 24 hours to make them…

including putting the peas in water over night (8-12 hours) and cooking them for ~45 minutes the next morning, and then letting them cool off and dry… before roasting them in the evening!

At first when I took them out of the oven it seemed to me I was not getting very much for all my efforts (as the chickbeans shrink again when roasted!) But remember they are beans, and nutritious – one does not need lots of them to feel satisfied. They’re more like nuts than like popcorn that way!

Posted by DawnTreader at 18:56