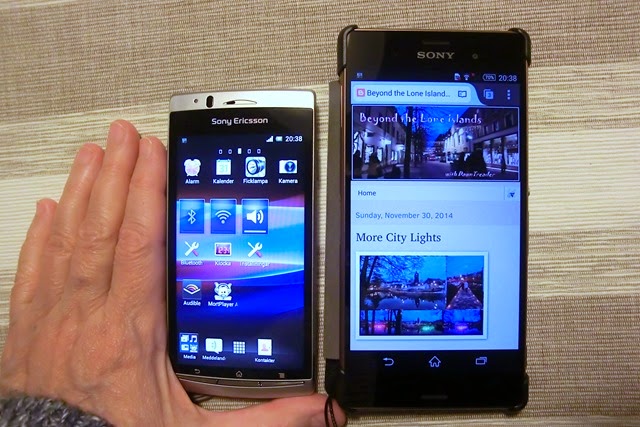 My “old” phone (to the left), smart though it may still look, has been making more and more complaints lately about its memory being full, and therefore refusing to update apps. Apps on the other hand are sprightly multiplying little things (getting their energy from only-Google-knows-where) which keep on calling for my attention: “Hey, there’s a brand new version of me available!” they take turns reminding me, on a more or less daily basis. “Please update NOW or you’ll soon find yourself ex-communicated…”

Finally I succumbed to the pressure and had to accept that after little more than three years, I have to let my “old” Xperia Arc retire from active service and replace it with Big Brother Xperia Z3 (to the right)…

The Z3 is also on the market in a compact version, more the size of my old one... Decisions, decisions! I’m still not sure whether I made the “right” choice. Time might tell – or possibly leave me undecided for another three years; who knows! The smaller size was/is definitely easier to fit into a pocket or handbag. On the other hand though, I do tend to use the device more as a mini-computer than as a phone... And then a bigger screen does have its undeniable advantages. (So the big one was what I finally bought.)

Until next week I’m actually not able to use it as phone. I decided I wanted to keep my old number, but to do that, I still had to order a new SIM card; as for mysterious reasons, the bigger phone requires a smaller card than the small phone...

As an afterthought it occurred to me that I might still want a new cash card number for the old phone though. That way, I will still have the option to use that one as “safety phone” sometimes when the big one feels unnecessarily clumsy to carry with me. (When I’m only out for a short walk, for example, I very rarely use the phone - I just like to know that I can do so…)

Anyway, I have now received both the new small card with the old number for the new big phone, and a new big card with a new number for the old small phone… But as I found it safer (of course) to set the activation date later rather than sooner, the Big Switch won’t be taking place until next Monday.

In the meantime, I’m getting acquainted with and sorting the wifi settings and apps etc; which so far seem to be to my satisfaction. I’m even almost feeling optimistic that perhaps somewhere down the line it might save time rather than  just consume it. (That’s probably naïve of me, but where would we be without Hope?)

The Z3 is also said to have a really good camera, and  to be waterproof; so when I’ve got the phone part working I’m also looking forward to taking it out for some experimental photo walks!