‘Santa Per’ (my brother) came visiting this week, bringing Big Parcels from Ikea. He also spent one afternoon and the next morning assembling all the bits and pieces into nice new study/home office furniture for me; and when he left, he took all the old retired things away with him. (Almost. I’m still here…) 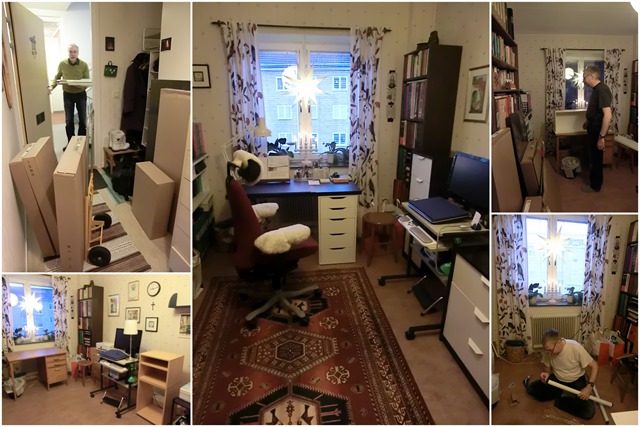 Bottom left: Before
Middle: After

Have to say the result feels like a major face-lift, even though ‘only’ three pieces of furniture were replaced. The new desk + two new chests of drawers are blackish brown on top but with white drawers; thus colour matching (more or less) my old bookcases (three tall dark brown ones + a lower white one next to the desk). Just as I hoped, this brought a more coherent look to the room, without making me feel I need to replace the bookcases as well (they still do their job well enough).

The new desk is a little bigger than the old one, and the drawer units also give me a few more drawers compared to before, making it easier to organize stuff. (Or at least hide it!)

Posted by DawnTreader at 17:38