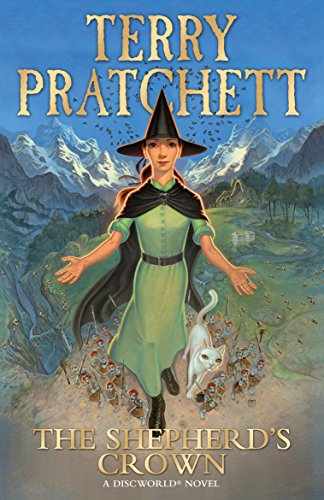 The Shepherd’s Crown is Terry Pratchett's final Discworld novel, published after his death, but written more or less parallel with the last one published before he died – Raising Steam, which I also briefly reviewed a couple of months back: here.

The Shepherd’s Crown makes some references to that book(and the Discworld having entered the age of railways and machines); but it belongs in the “Witches” subseries of the Discworld books, and is the fifth one to feature the young witch Tiffany Aching.

Terry Pratchett (1948-2015) suffered from Alzheimer’s disease in his last years. To me there is really nothing in this novel to indicate memory problems, or his leaving this novel not fully finished. (It is explained in an afterword that Pratchett had the whole storyline worked out in his script; but had he lived to completely finish it himself, it is likely that he would have filled in some parts with more detail.) What I do believe I sense is an awareness in the author of life drawing to a close; and of a wish to tidy things up and leave everything in good order.

The novel starts out with the witch Granny Weatherwax doing just that: tidying things up, and making sure that her acknowledged position as head witch is passed on to the right person. And after she has passed away, the young witch Tiffany, even though she has proved her powers before, finds herself confronted with rather overwhelming challenges: How on earth shall she be able to cope with the tasks she has already, and step into Granny’s boots as well? Especially when on top of all, she has to deal with another confrontation with the Fairies trying to break through into the world of humans once again…

While it is rather sad that this is the last novel in the series (Pratchett’s daughter has said that there will be no more), I think it is really a very worthy ending – and I’m glad it was published.

If you want to know more about the Discworld, the Wikipedia article provides a lot of information, including a complete Bibliography which is very helpful whether you want to read the books in the order they were written, or according to subseries.