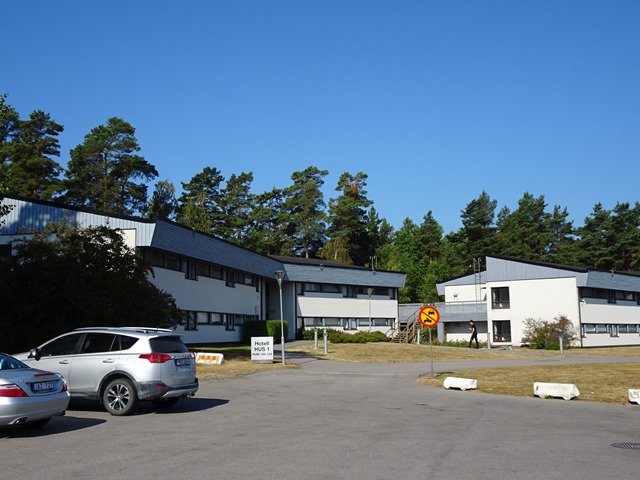 In Kalmar, we stayed three nights at this hotel on the outskirts of the city, rather close to the Öland bridge (but not so close that you actually see the bridge from there). It’s part of the university campus and serves a conference hotel during most of the year; but also as a convenient B&B for tourists in the summer. The accommodation is in a different building than the reception and restaurant; but in the hot dry weather we were having, that was not a problem. For us, the location was good because we wanted one full day over on Öland, and another day in the city of Kalmar; and it was kind of relaxing not to have to start every morning with packing all our stuff again.

After breakfast on Thursday, we drove into the city of Kalmar, and found a parking lot within reasonable walking distance from the places we inteded to visit before lunch. The parking was close to an old city wall with a walkpath on top, of which we made use to get an overview of the surroundings. 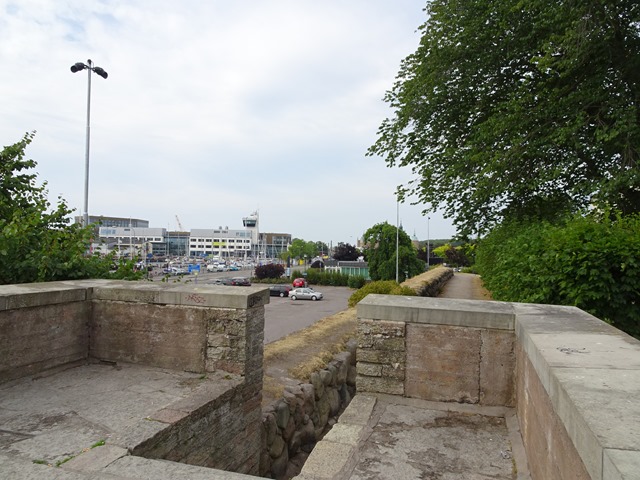 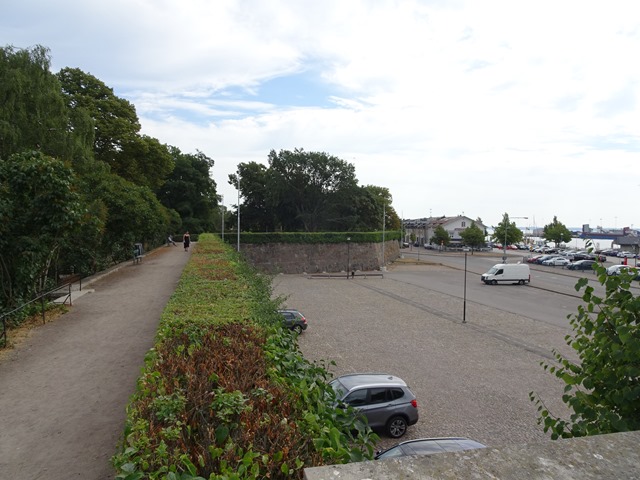 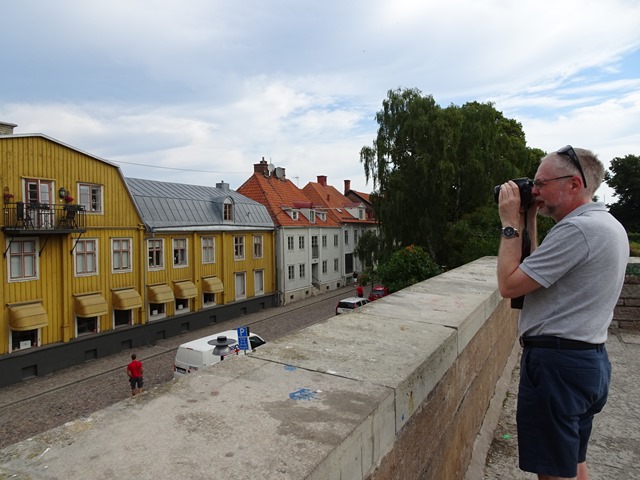 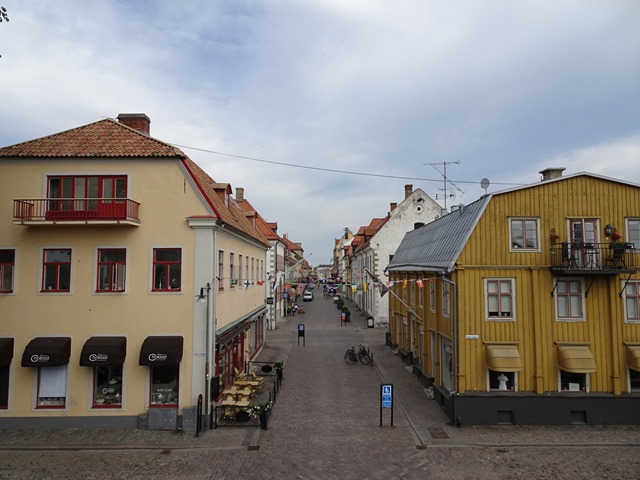 Somewhere around here we got down from the wall and went off in a different direction. 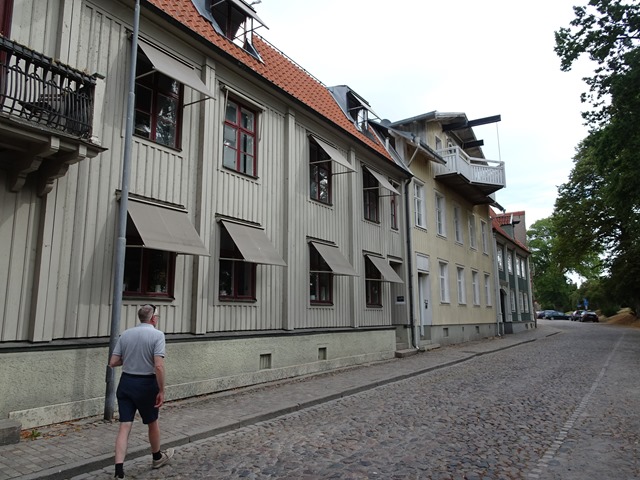 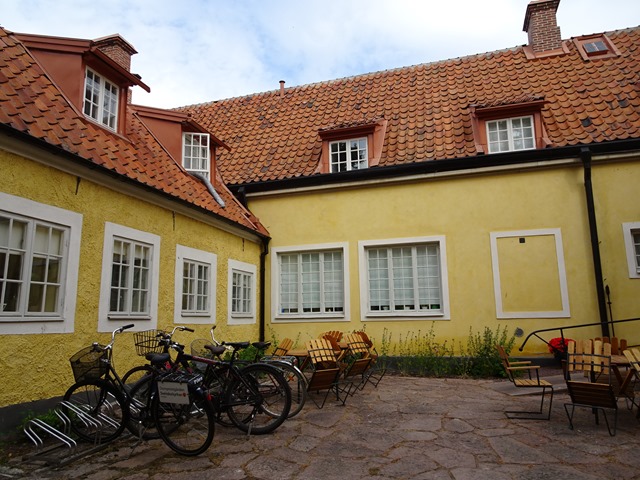 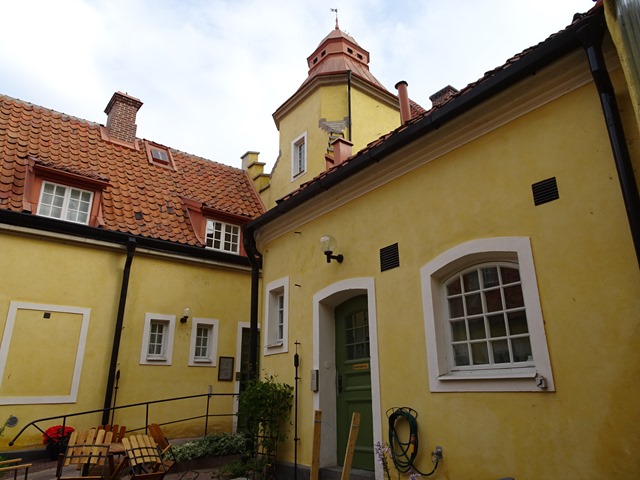 There are a lot of picturesque old houses in Kalmar and I kept snapping photos without really knowing what I was looking at most of the time. 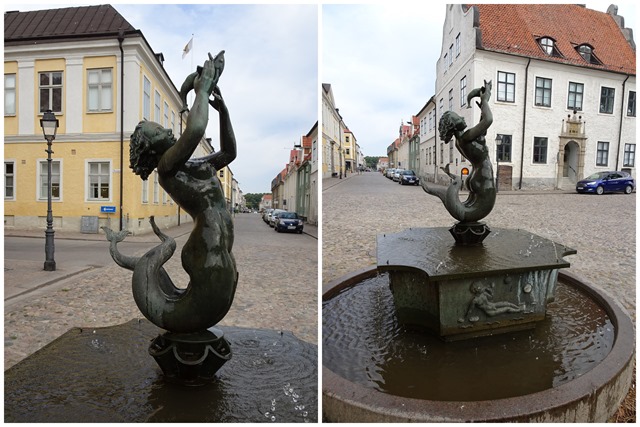 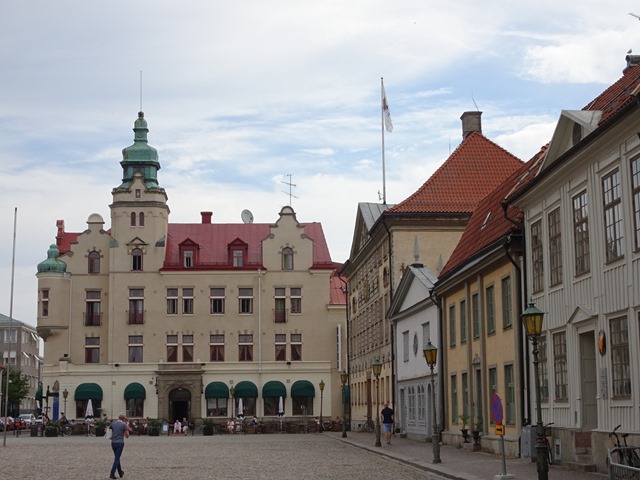 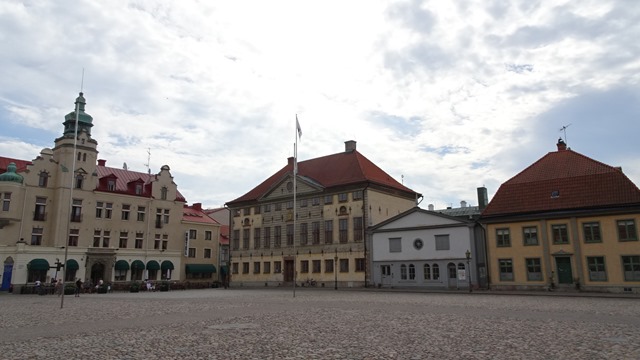 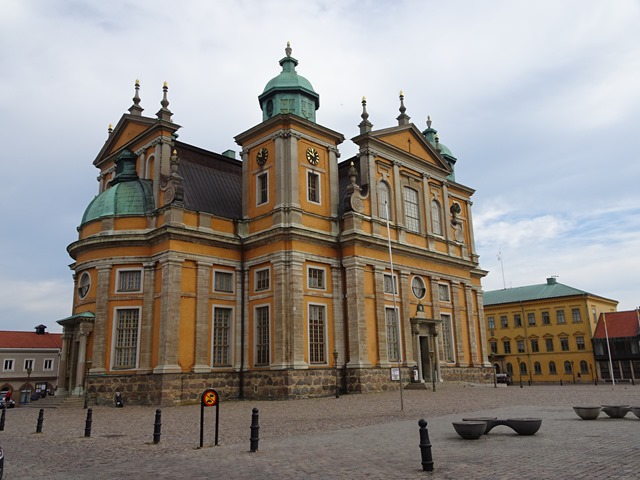 The 17th century Cathedral stands out a bit extra though – although I have to confess that if I hadn’t known what I was looking for, “cathedral” might not have been my first guess for this building – looking more like some kind of compact baroque palace. 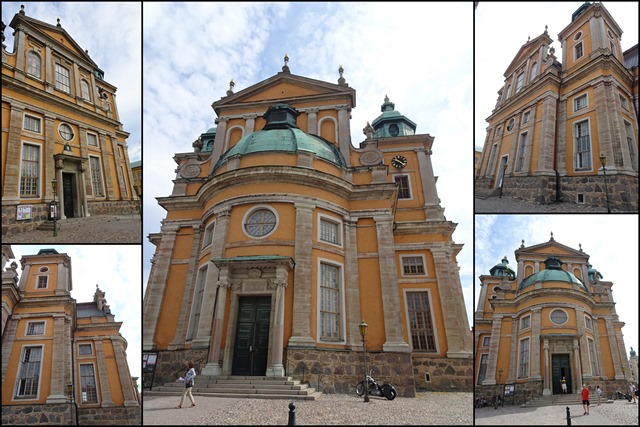 When reading up on the history of Kalmar afterwards, I learn that the cathedral (and also the city wall) belongs to the ‘new’ fortified city of Kalmar, built in the mid-17th century. Before that, there was/is an even older Old Town, closer to the Castle (which we’ll be visiting in another post). The ‘new’ town was planned according to Renaissance ideals, with church and town hall across from one another in the town square. The cathedral was designed by the Swedish architect Nicodemus Tessin the Elder and is one of the foremost examples of classical baroque architecture in Sweden. The construction began in 1660, but was interrupted on several occasions, including a war. The cathedral was finally finished in 1703. 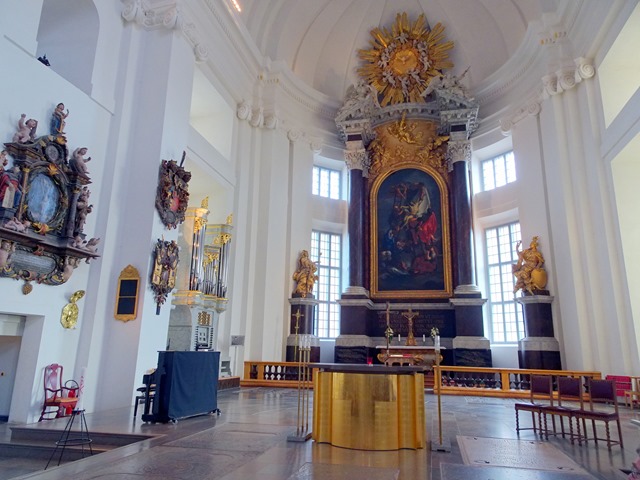 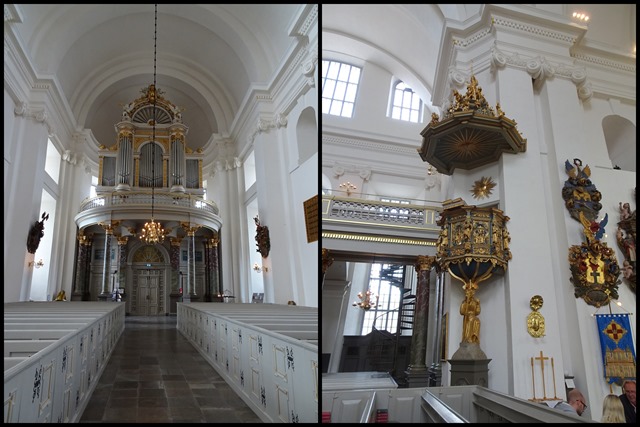 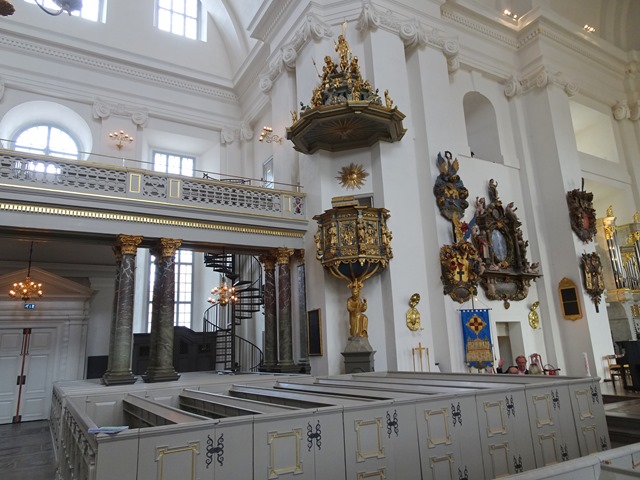 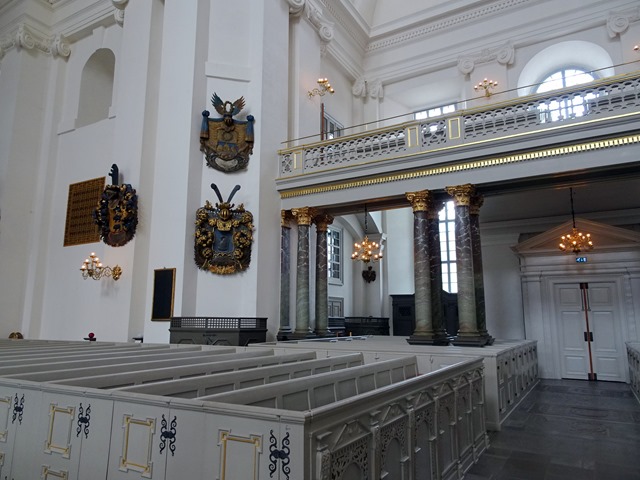 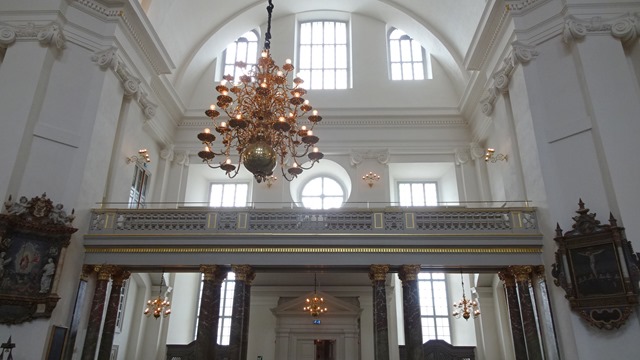 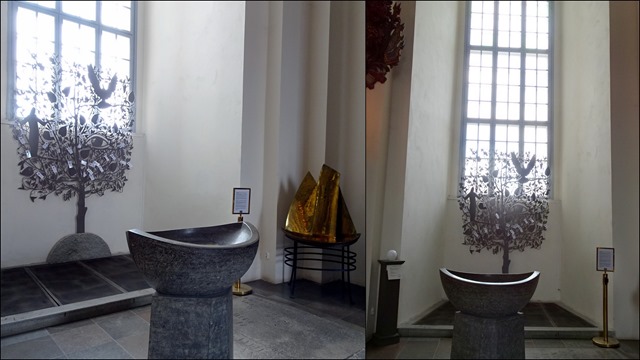 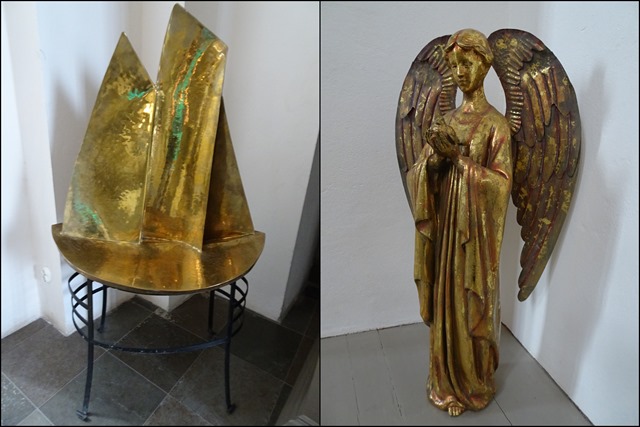 I have no details about the interior of the church, but while the main decorations may still be original baroque, there are definitely also a few items of later design. I did not go up front to take close-up photos, because there was a clergyman sitting there talking to a couple about some ceremony. (The stone baptismal font shaped like a ship was at the back of the church, or in a side aisle. I think they also had another one up front.)

Posted by DawnTreader at 19:09