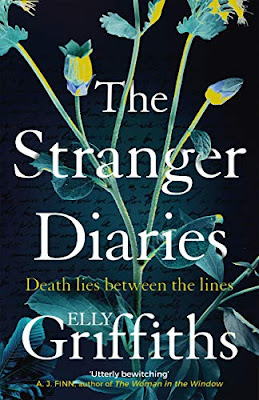 The Stranger Diaries by Elly Griffiths (2019)

Elly Griffiths is perhaps best known as the author of the Ruth Galloway series – and mentioned by me a number of times before, including a recent review of The Stone Circle, the 11th book in that series. (Ruth is a forensic archaeologist with a tendency to get mixed up in mysterious modern-day deaths as well as really ancient ones.)

The Stranger Diaries, however, is a stand-alone, 'modern Gothic' mystery novel.

Clare Cassidy is an English teacher specializing in classic Gothic literature (like the books by Wilkie Collins, author of The Moonstone and The Woman in White, and several others). Clare is especially interested in another writer of the same genre and time-period, with a connection to the school where she is teaching – 'R.M. Holland' (a fictional character). She is doing research to write a book about him. But when a colleague and close friend of Clare's is found dead, horror fiction and 'real life' begin to get mixed up in a way that is just as spooky and scary as the classics. In particular, certain clues seem to point to a short story by Holland entitled The Stranger. (This 'story within the story', written in the classic Gothic horror story tradition, is frequently quoted and referred to, but also included in its entirety in the novel.)

The narrative perspective shifts throughout the book (reminding of Wilkie Collins). In between excerpts from The Stranger, we get to take part of events as shared by Clare (who also keeps a diary), her teenage daughter Georgie (who, as so many teenagers, leads a kind of double life – not sharing every detail of her 'private' life with her mum any more...), and the female police detective investigating the murder of Clare's colleague. (This may sound confusing, but it's made clear by chapter headings who is the narrator in each chapter. And in the audio book, four different actors are reading the different parts.)

I enjoyed the book, and as I had it on both Kindle and Audible, it kept me in its spell the whole weekend (allowing me to shift between reading with my eyes vs ears)... I guess it helped a bit that I did read both The Moonstone and The Woman in White only a few years ago – even if I don't recall every detail, at least I get the references to the genre as such. Shakespeare's Macbeth and The Tempest are also referred to. I read Macbeth back in my university days (English lit), but I don't think I ever read The Tempest. I may have to remedy that! (On the other hand, it's easy nowadays to find summaries of old classics online.)

I was also reminded of Edgar Allan Poe, but I don't think his name was actually mentioned anywhere within the book.

Anyway, I do tend to like books that make me want to read, reread and research other books as well (and old classics in particular)...
Posted by DawnTreader at 20:33