“Did you ever stop to think, and forget to start again?”
(Winnie the Pooh)

I've been feeling a bit like that lately... Lots of thoughts buzzing in my head, but only resulting in writer's block.

One thing causing media discussions in Sweden lately (besides  Brexit and other various international news) is some proposed changes in our common grade school curriculum, from the National Agency for Education. One such suggested change was to completely drop the whole period of history from Antiquity (Greece and Rome and all that) and all the way up to the 18th century. However, that suggestion has already been officially withdrawn; as it caused immediate massive media attention and protests - not only from historians and teachers, but from "ordinary people" as well.

Myself, I didn't believe my ears when I first heard it. (Had it been around April 1st, I would have taken it for an April Fool's joke.) Yes, I'm sure the way things are taught probably does need adjusting now and then. Of course a lot of things can easily be looked up when needed these days, rather than putting effort into memorizing them (and then forgetting them anyway). But in my experience, you do still need at least some basic idea of context in order to even know what to look up, and also to connect one fact to another...

I understand that similar (i.e. downright stupid) suggestions have also been made for other subjects, like geography and religion. I'm not sure where it will all end up, yet - so I'll keep to history for now (or else I will just get lost in my thoughts again).

Ironically, with these discussions still going on (in television, radio, papers, internet), Swedish television has been broadcasting some really interesting (British) documentaries about Antiquity and archaeology lately: Greek and Roman mythology, literature and architecture, and also Egyptian pyramids and other burial sites. I've enjoyed watching these. I've always been fascinated by this kind of stuff (even back in my school days) - without in any way being an expert or storing all the details in my memory.

Some of you reading this I'm sure will also be familiar with the British TV show Time Team - also a favourite of mine. Can you imagine Britain - Brexit or no Brexit! - erasing the whole Roman era from the history books? (And, for that matter, king Arthur and Shakespeare as well, if history was not to start until 1700...)
As it happens, I'm also currently listening to an Audible series of lectures about Ancient Civilizations of North America. (Not for any particular reason other than that I suppose I happened to find it at a reasonable price and thought it looked interesting.) 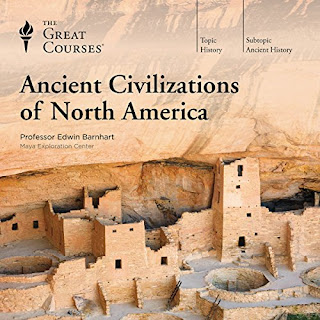 Now this is getting woven into my thoughts on history in general as well - because these lectures are making me realize, that when it comes to North America, my concept of its history really does not go back any further than the European colonization. Of course I've known from childhood that there were "Indians" living there before the Europeans arrived. But it strikes me now that the only ancient American "civilizations" I recall reading or hearing much about have been those in South/Central America (like the Inkas and Mayas). Yes, I also knew (since not-sure-when in my childhood) there were also various "Indian tribes" in North America, and I came across a few of those names through books and films. But my images of "Red Indians" are mostly from old 60s/70s movies and TV-series.

Of course I know that the historical perspective has changed over the decades since then, and one speaks of Native Americans now. But this series of lectures is still a real revelation to me. (I'm still only like half-way through.) I have to admit I had absolutely no concept of how many ancient civilizations there were in North America, even long before the European colonization. Not just nomads, but ancient cities with hundreds and even thousands of inhabitants; fishing and trading, digging canals and irrigation systems, growing corn, building burial mounds and ritual centers that can be compared to the Egyptian pyramids or Stonehenge (with perfect geometry and aligned to the sun and the moon etc), and... and... and all without me knowing, until now (when I'm 64)... ;)

So, out of curiosity, I have to ask my American friends: Did you know?? About pre-Columbian North American archaeological periods and cultures, going back many thousands of years??

Of course, if you live elsewhere in the world, your comments are welcome as well. Do you think history is important, or should we just forget about it and move on??
Posted by DawnTreader at 00:39