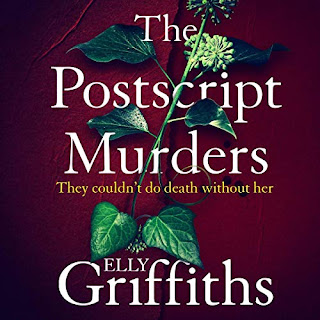 The Postscript Murders
by Elly Griffiths (2020)

The death of a 90 years old woman would not normally be regarded as suspicious . But when Peggy Smith dies, there are still factors involved that makes both her carer Natalka, and later also Detective Sergeant Harbinder Kaur, think twice about it.

For one thing, it turns out that Peggy had been a "murder consultant", helping authors of crime novels to invent murder plots for their books...

The Postcript Murders is the 2nd book by Elly Griffiths to feature DS Harbinder Kaur, a lesbian Sikh police sergeant in her 30s who still lives with her parents. I have to admit that I if I hadn't happened to see it mentioned somewhere beforehand, I  might not even have remembered the detective from the previous book where she figured, The Stranger Diaries (which at the time I thought of as a standalone, from which I remember other characters better than the detective). And I still like the Ruth Galloway series better. On the whole, the characters in the The Postscript Murders rather failed to engage me. But that may also have had something to do with me having difficulties to concentrate on reading/listening because of other things nothing to do with the book itself. 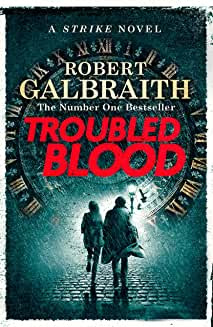 "Private Detective Cormoran Strike is visiting his family in Cornwall when he is approached by a woman asking for help finding her mother, Margot Bamborough - who went missing in mysterious circumstances in 1974.

Strike has never tackled a cold case before, let alone one forty years old. But despite the slim chance of success, he is intrigued and takes it on; adding to the long list of cases that he and his partner in the agency, Robin Ellacott, are currently working on. And Robin herself is also juggling a messy divorce and unwanted male attention, as well as battling her own feelings about Strike.

As Strike and Robin investigate Margot's disappearance, they come up against a fiendishly complex case with leads that include tarot cards, a psychopathic serial killer and witnesses who cannot all be trusted. And they learn that even cases decades old can prove to be deadly . . ."

This book I bought for Kindle, and as it is a long and complex one, and my own concentration wasn't tip top, it took me two months to read. Actually I think I'd really recommend reading this book in print, since it also involves a few "illustrations" of notes and drawings by hand, which play a part in the plot. (Not that I'm sure anyone is really supposed to be able to make sense of them anyway - but still! On Kindle it was definitely not possible.)

Having read the previous four Cormoran Strike novels, I knew beforehand that I wouldn't prefer this one as audio book; because for one thing, these books tend to involve too much gory detail of the kind that I have to admit I prefer to just skim-read. In this book, as they're investigating a cold case, very much of the plot is also in dialogue, between the detectives, or between them and various witnesses trying to recall things from the past. I know the books have also been turned into a TV-series (but that has not been on Swedish television, so I haven't seen it). I actually couldn't help thinking with some of the scenes in this book that the author had fallen into thinking 'screenplay' rather than novel... (Knowing that she has done a lot of writing directly for the screen as well.) I think I have to agree with some reviews I read which were of the opinion that the book could have benefited from a bit more editing. And perhaps especially towards the end.

In general, I also always feel a bit skeptical about detectives solving (c)old cases, and interviewing witnesses about things that took place like forty years ago.

All that said, the book still kept my interest up enough to want to keep on reading and find out how it would all fit together in the end. As always, the author is a supreme plot-twister, and also good at keeping up the dynamics between main characters. What I miss compared to Harry Potter and her other fantasy stories is the comic relief, though. This series, closer to reality, is a lot darker. This book also involved a lot of rather heavy "me-too" kind of stuff.

Posted by DawnTreader at 19:39