In a comment to my recent post A Tale of Two Paintings, Sandra asked me to post a close up of the picture shelves above my sofa that could be seen on the last photo. I replied that if you google picture shelf or picture ledge, you'll find similar ones at for example Ikea or Amazon. They are also called floating wall shelves in some ads, and they can be used for displaying anything from paintings to photos to small objects and figurines; with the advantage that you can easily change decorations around without making new holes in the wall.  I bought mine in a local shop when I moved into my present flat (12 years ago). Not that I usually move pictures around all that much, but it happens. 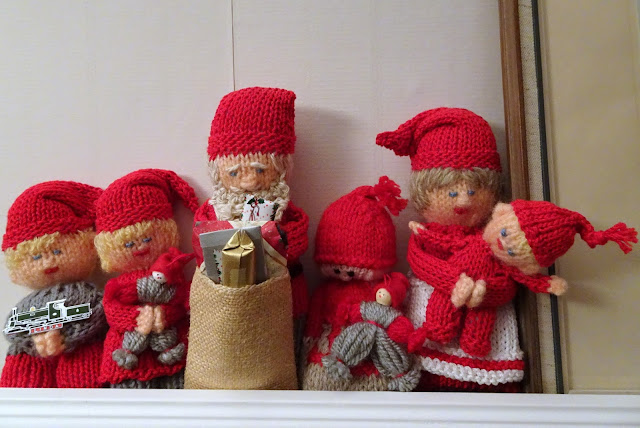 As it happens, one tomte family of little dolls knitted by my mum, spend their Christmases on one of those picture shelves. And just as I stretched out my hand to take them down to send them back to their rest-of-the-year-home (a box in my storage room), I heard tomtefar (Father Christmas) say: "Hey! How about some photos? I know it's on Sandra's wish list, and it would be a pity to keep her waiting until next Christmas..."

So, here is a collage showing the shelf at Christmas vs the rest of the year: 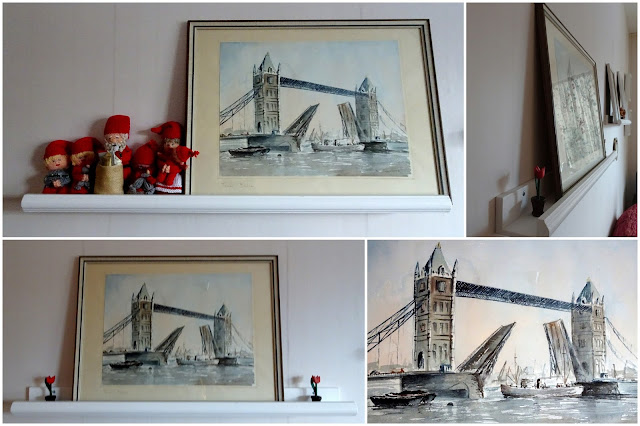 The painting of Tower Bridge is one that my parents bought from a "street artist" in London back in 1969, on our first family holiday to England/London. And it's one of the paintings from my parents' house that I wanted to keep, as I remember so well when we bought it. I thought I might even have a photo of the artist with his works spread out on the pavement. But when I check my photo album, there is no such photo there - only in my memory.

Posted by DawnTreader at 18:35