"There are three kinds of lies: lies, damned lies, and statistics."

Whoever said it first, this still tends to be repeated a lot, and it came to mind for me once again when I looked at some of my own statistics from 2020.

On my computer, I keep a database list of books I've read, going back to 2002. Usually at the end of a year it tells me that I've been reading about one book per week (including printed books, e-books and audio books). That was also my conclusion when printing out my list for 2020: 51 titles.

However,  I also received some statistics from Audible, which is where I keep most of my audio books. According to them, I listened to 58 titles (for a total of 703 hours). As on my own book list I've only marked 22 titles as Audible books, their statistics surprised me. I know there are some titles I've listened to that I did not enter on my own list as they were lectures or drama rather than books. There are are also some books I've listened to partly, but have not finished (so also did not get added to my own list). The total number of hours spent listening may perhaps be right, considering all the times I've fallen asleep listening and have had to rewind and re-listen. (I usually set a sleep timer, but it happens that I miss that, and some books have been talking away all through the night...)  But that I should have listened to as many as 58 different titles in one year still seems very unlikely (or a statistic lie!), however I count.

However, those statistics do not include all the postcards exchanged with friends...

Then there is Duolingo. They sent me their figures already back in October, claiming that... 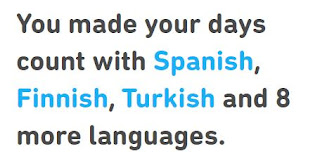 Sounds impressive, doesn't it? (counting minutes and words...) They also claim I earned 23560 "XP" (points) and 431 "crowns" (to do with finishing levels within courses) and advanced to Diamond League (whatever that means).  I am very sure that "studying" a word is not the same as memorizing it, though... (There's an awful lot of forgetting and repeating and wild guessing involved in trying to learn multiple languages...)

Spanish is indeed the Duolingo language I still spend the most time on; and having started from zero some 4½ years ago, I have definitely made progress - but Spanish is also their main course, which they keep updating and adding new lessons to all the time.

Finnish is my latest added course - it was introduced last summer (2020), still in beta version. There are a lot of people of Finnish origin living in Sweden, and back in my childhood they were the dominant group of labour immigrants. So nearly all my life I've always heard a lot of Finnish spoken (but never understood a word...) Even learning just a few words and a teeny tiny bit of the most basic grammar (very different from Swedish) feels like progress.

Well. At least when I ask myself what I do with my time, I have some statistics!