Since last week, I have continued to go through some more of my paternal grandfather's notes from his own research into his family history. I've also been looking at some of the old photo albums (again). There are very few photos from before the early/mid 1920s. Two of my grandmother's old albums have no notes in them at all. All the original photos are very small. Some later albums have notes, but the photos are not in chronological order, and the notes are more often to do with "where" than with "who" or "when". (To my grandparents, the "who" was probably usually considered obvious... To me, not so much!)

In last week's Sepia post I showed photos of the farmhouse where my grandmother grew up vs the small cottage where my grandfather grew up (with his grandparents). They both lived in the same neighbourhood / village. My grandmother Sally was born in 1900 and my grandfather Gustaf in 1904. In childhood, four years age difference is rather a lot. (When they got engaged, in 1929, she was 29 and he 25. They got married a year later.) However, my grandmother's younger brother Nils was born in 1902, and my guess is that he and Gustaf were friends even from childhood/school. (Back in those days and in a countryside village, school is likely to have been a small one of the kind with children of different ages taught together.)

Please tell me what you think: Is the boy/young man on the left (or in the middle in the third photo) the same person in all three? I recognize the one on the right as my grandmother's brother. I also know that it is my grandfather as a young man to the left in the middle photo; but I'm less sure whether it is also him in the two childhood photos. 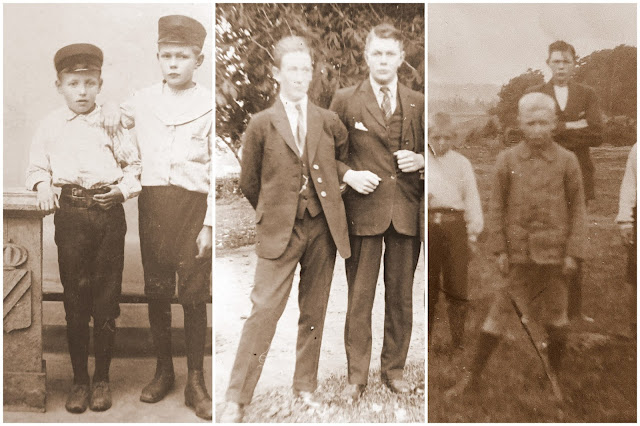 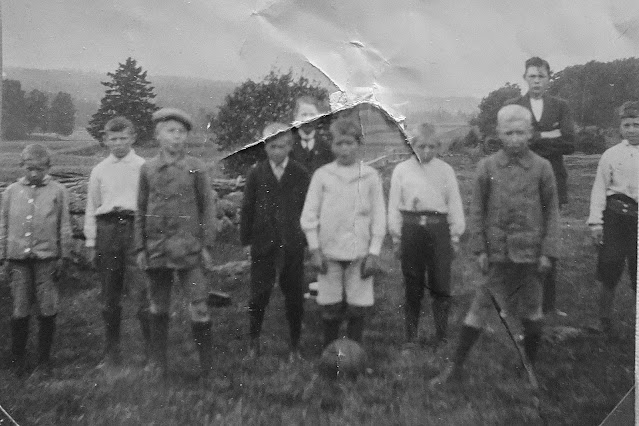 The album text under this one is just "In the [village] football team". No names. Comparing it to the middle photo in the collage, can you see why I'm picking out this particular boy from the team as probably being my grandfather? ;)

As for the first photo, I'm wondering about the occasion, as it seems to be a professional photo. To do with school, perhaps? They're wearing very similar outfits. 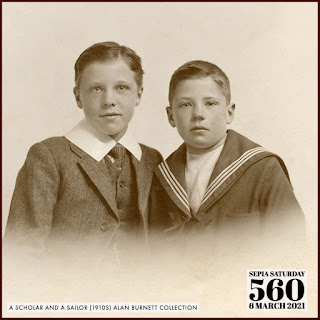 Posted by DawnTreader at 13:38