Sepia Saturday – Greetings from the Past

May I draw your attention, please, to my blog

Greetings from the Past

where I just added a new post and also updated the introduction pages and the layout a bit.

As I mentioned a few weeks ago (here), I recently got an email out of the blue from a distant cousin, who had happened to find my blog and recognized our mutual relatives in it. He managed to fill in some blanks for me concerning my grandmother’s older sisters – the essence of it summarized in today’s post.

I also recently found the blog Sepia Saturday with a weekly meme based on old photos. I will try to join in there from time to time (from the Greetings blog), using their prompts as one tool among others to continue to explore the old family photos. 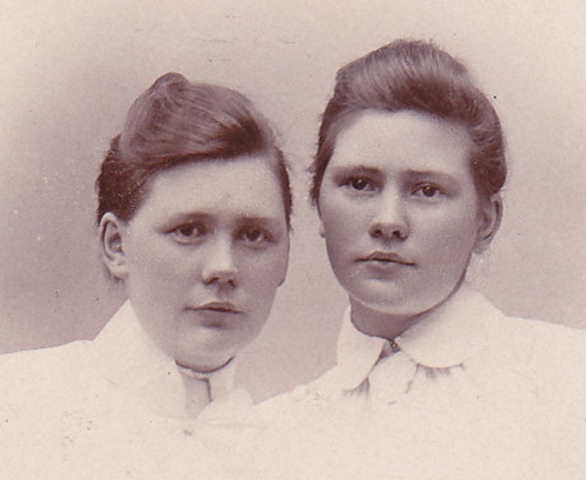 My grandmother’s half-sisters Ester and Gerda, probably around the time my grandma was born, which was 1900.

Last night I also scanned another dozen or so old postcards and I hope to be getting on with posting those soon. Posts for the Greetings blog tend to be rather time consuming though, partly because I’m keeping them bilingual (English and Swedish), and partly because I never know when I start out, where the research is going to take me! Hopefully, some of the new facts I learned will be of help as I continue to try to interpret the messages written on the postcards.

By the way, as I followed a few links from Sepia Saturday today, I learned a new word : deltiology.

Deltiology (from Greek δελτίον, deltion, diminutive of δέλτος, deltos, "writing tablet, letter"; and -λογία, -logia) is the study and collection of postcards. Professor Randall Rhoades of Ashland, Ohio, coined a word in 1945 that became the accepted description of the study of picture postcards. It took about 20 years for the name to appear in the dictionary the first time.

And if you devote yourself to deltiology, then you are a deltiologist.

Posted by DawnTreader at 14:42