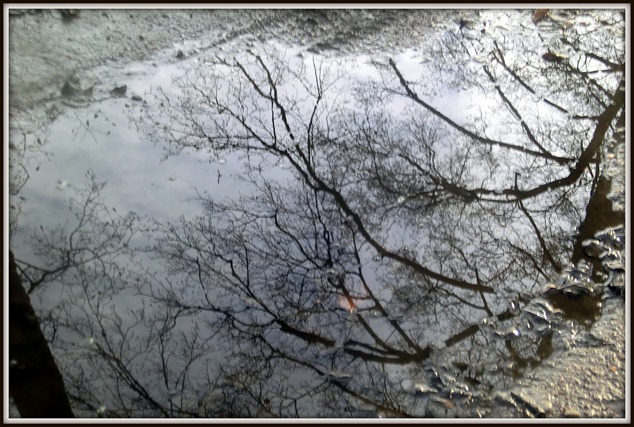 A puddle reflection for Weekend Reflections

It’s November. This is about as exciting as it gets!

We’ve had a grey week and an even greyer weekend.
Earlier in the week I did a bit of early Christmas shopping and even had an attack of creative mood and got started on my Christmas cards… Today however it’s been so dark it’s felt like evening all day, and I’ve just been sleeping and reading and sleeping (yes I know I already said sleeping, but I fell asleep again!) - with pauses for breakfast and lunch - until finally, around 3 pm, I got myself out on a short walk while there seemed to be a break in the rain. But of course someone turned on the tap again while I was still out.

The book I’m engrossed in at the moment (when not nodding off to it) is The Golden Acorn by Catherine Cooper (2010), which I downloaded for free to my Kindle from Amazon.

It’s the first in a series and of course only the first is free… Remains to be seen if I get caught up in it enough to buy the next two. It’s a British children’s fantasy book, involving Celtic and classic folklore and mythology, and “so far, so good”… One thing I do like about my Kindle is the direct access to dictionary and Wikipedia while reading… not least when one keeps coming across hamadryads, spriggans, bogies, brownies and the like ;) Even if (or because) each fantasy writer may give mythical creatures his/her own twist, I enjoy learning about the sources as well.