Postcrossing is a project/website that allows people to randomly exchange postcards all across the globe, for free – “well, almost free!” – i.e. no extra cost besides the cards and stamps you have to buy in order to be able to send your own.

The main idea is that if you send a postcard, you will receive one back from another registered Postcrosser somewhere in the world, but not the same person that you sent your own card to.

Friend and fellow blogger Scriptor Senex in England has been writing enthusiastically about the fun of postcrossing for over a year now, and more recently I noticed that Doreen had joined too. I’ve been thinking about it for a while but finally decided a couple of weeks ago.

Since 15 May I’ve sent eleven cards off out into the world and today I received my first one back: 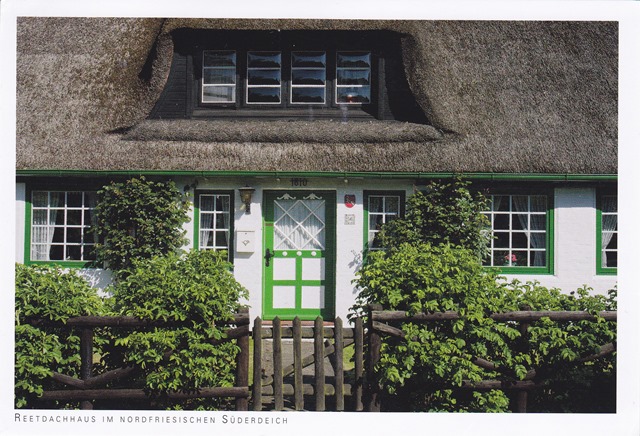 I do not have the ambition to blog every card received but I decided to wait to write about this at all until I had received my first card (and then I would). So I was delighted when it dropped in today and turned out to be such a lovely one and absolutely blogworthy! :)

I put a few different suggestions on my PC profile and doors/windows one of them, since they were always among my favourites; so it was very fitting that the first card I received through postcrossing had both! Many thanks to Hanna in Germany! (who is not likely to read this, as I have not linked my blog to my PC profile; but I did sent her a thank you message via the website when registering the card as received)

What made me decide to join was really all the stamps I found while going through my father’s study after he died. In the past he collected stamps and it turned out he continued to subscribe to new releases long after he’d lost the energy to ‘do’ anything with them when they arrived (like organize them into albums etc).

So I took home all such stamps that I found  (i.e. the ones from the last decade or so that had not been put into albums) and put them in a drawer of my own… Then recently I sat down and started sorting them out according to value rather than any other system; and realised I had A LOT that could be used for foreign postage.

As in my opinion stamps were made to travel, and I also quite enjoy buying postcards but feel the same about those (i.e. that they were made to travel) – and at the same time email (and blogging) seems to have taken over most of my regular correspondence these days – well, Postcrossing seemed like the answer. Let the stamps go travelling and collect the recieved postcards instead :) … I think that suits me better!

Question: Do you collect anything? What?

Posted by DawnTreader at 17:46