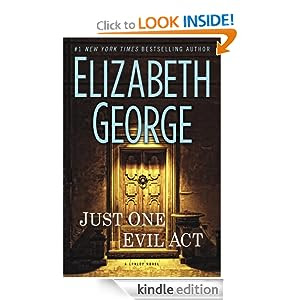 In my review of the previous novel in Elizabeth George’s Lynley/Havers series (Believing the Lie), about a year ago, I expressed a certain frustration both with the separate mystery in that book, and with the background story evolving extremely slowly, with the last five or six novels in the series all taking place in a fictional time span of less than one year (but published over a time period of about 7-8 years).

With this in mind, and Just One Evil Act again picking up exactly where Believing the Lie left off (still within that year), my expectations weren’t very high. However, I’m glad to say: I found this one to be a real page-turner, and the author back in top form.

I still have certain questions in my mind about the time aspects (vs modern technology, for one thing) but, ignoring that… I think I have to give this one full marks. The story is full of twists and turns. From beginning to end of this novel, as reader you must be prepared to find yourself thrown between conviction and doubt more times than you’ll be able to count.

The relationship developments in the background does not make it easy to write reviews or introductions of the later books without revealing too much to those who might not yet have read the earlier ones (and want to). However: This story focuses more on Barbara Havers than on Thomas Lynley. It involves a kidnapping which turns out more complicated than it first seemed; and as Barbara knows the family, she’s the one to get herself emotionally entangled, at the same time as she is prepared to do just about anything to help. The action takes place partly in London and (for a change) partly in Tuscany in Italy. Besides the London Metropolitan police detectives we already know from previous novels, we are introduced to Italian police and authorities, as well as private detectives and journalists in both countries. Some of them we get to know quite well, which makes me suspect we might come across them again some day (?)

Both private and working relationships are severely tested. Truth and lies are intertwined until it’s hard for anyone, anywhere, to tell what’s really supposed to be what. General communication problems are further enhanced by language difficulties. (But at the same time, some communication succeeds across that barrier.) To begin with I found myself annoyed with what seemed an overuse of Italian without translation in this book. But as the story proceeded, I had to admit this may have served a defendable purpose, by forcing me as reader to share the frustration of some of the characters facing the same problem.

What amazed me most in all of this was that at the same time as the story was complicated, it wasn’t really hard to follow. And for that, kudos to the author! :)

Kudos (from the Ancient Greek: κῦδος) is acclaim or praise for exceptional achievement.