Friday My Town theme of the week:
“share with us what you love about your town” 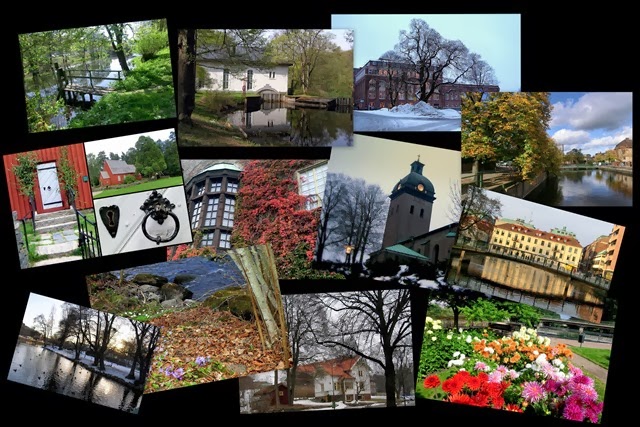 This is a collage I made a couple of years ago of pictures I used for a monthly calendar.

Borås received its town privileges in 1621. The reason was to give local pedlars a legal place for vending their merchandise.  After a century the town had over 2,000 inhabitants.

The town was ravaged by fire four times between 1681 and 1827. The only building which stood through all four fires is this church (Caroli Church), originating from 1669 (the tower added in 1681): 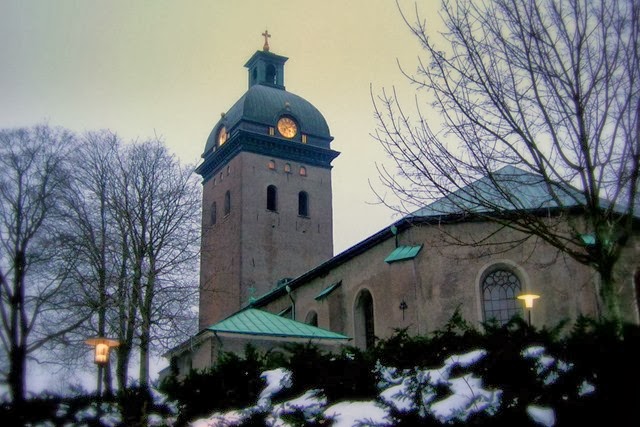 In the mid 1800s several textile mills were founded along the river Viskan, and the town continued to grow. 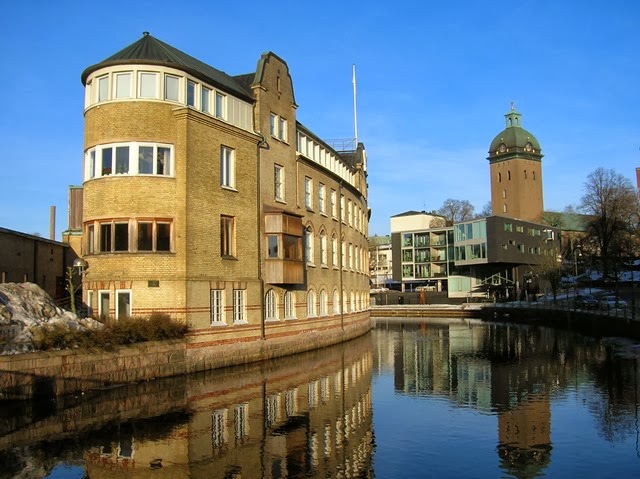 In the 1900s Borås became a textile industry and mail order centre.

In 1906 another church tower was added to the skyline: 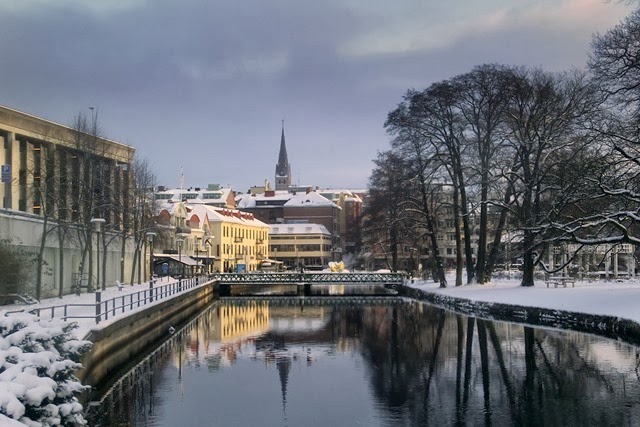 Today Borås is a city of about 100,000 inhabitants; still proud of the commerce and textile industry heritage; but in later years the focus has shifted from production to design and fashion. Much effort has also been put into changing our reputation from a dull industrial town to a centre of culture and art.

Borås has a unique Textile Museum (which will be reopening this spring in new premises under the same roof as the Textile College), a public Art museum, and also the private Abecita art museum (which I blogged about just recently). 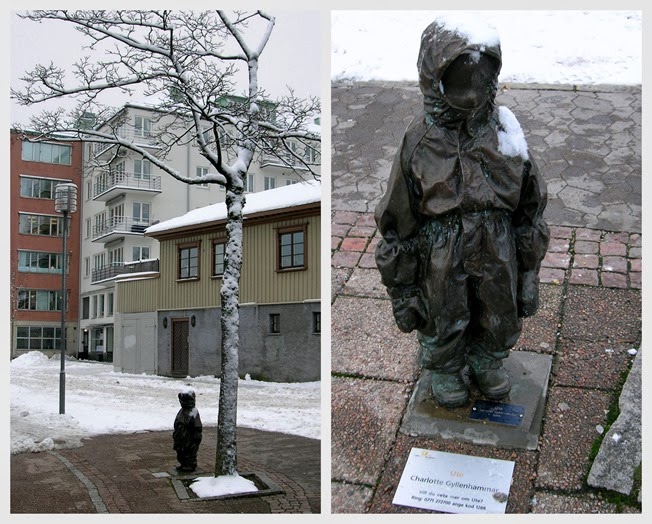 Since a few years back, Borås now has a biannual  sculpture festival (time for another one this summer!); and a number of sculptures by internationally famous artists have also been permanently added to our streets, squares and parks. 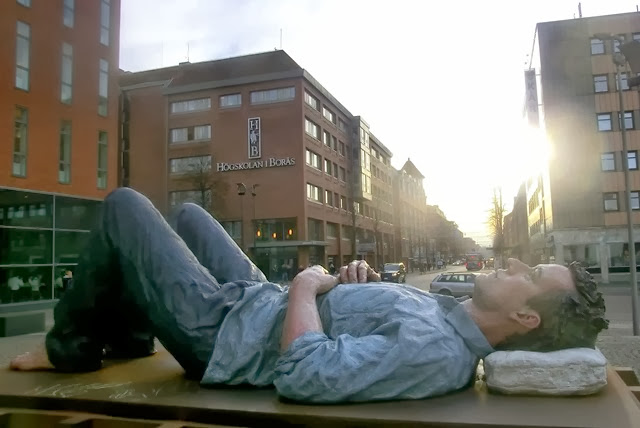 Catafalque by Sean Henry, outside the College 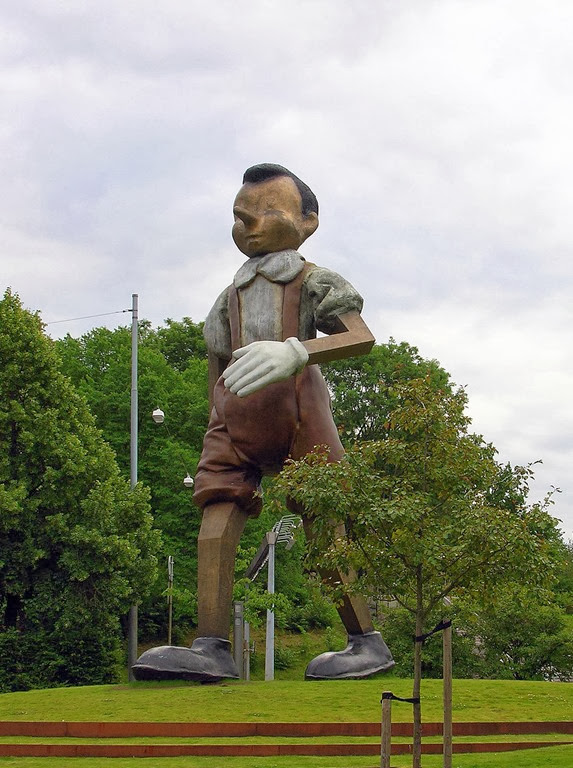 Pinocchio (or Walking to Borås) by Jim Dine (9 m high) 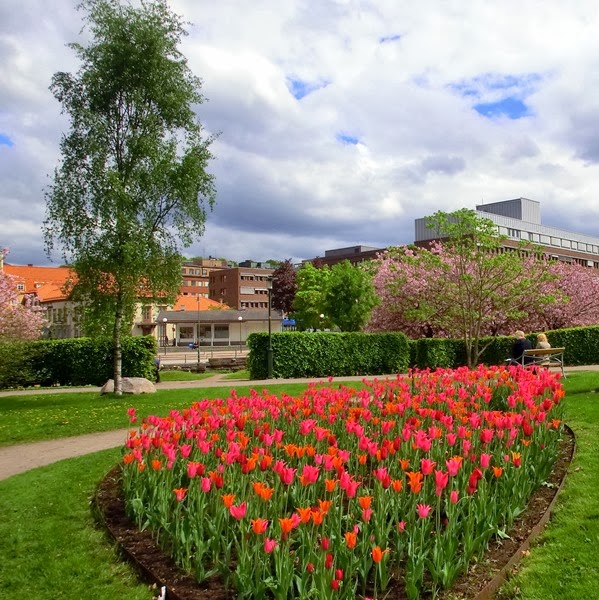 The Town Park by the river is a popular oasis in summer. I chose this picture for today because of the tulip bed resembling a red heart (for Valentine’s Day).

I did not grow up in Borås; I was 30 years old when I moved here. My parents did grow up here, though, and we used to visit my grandparents here in my childhood. However, both sets of grandparents lived on the outskirts of town, and I have no memories of the downtown core until in my teens – when I also had a penfriend living here, and took the bus into town on my own on a few occasions to meet her. (I lost touch with her long before I came here to live, I’m afraid.)

The reason why I moved here in 1986 is a mix of the family roots + having other friends living here at the time (whom I had got to know elsewhere) + hoping for better job opportunities than in the town where I attended university. (Alas the job market did not turn out all that great, but that’s another story.)

Anyway, compared to when I first moved here, I think the city centre has developed to be a lot more lively and attractive than it used to be.

Since I started blogging five years ago (about six months after I moved into my present flat, which is also closer to the town centre than where I lived before) I’ve also been walking about with my camera a lot more – a great way of noticing not only when new things happen, but also things that were “always” there!

I’m afraid the rainy winter weather we’re having just now is not the most “flattering” for anyone or anything, though – so for this post I’ve dipped into my archives (2009-2013)!

Posted by DawnTreader at 17:36