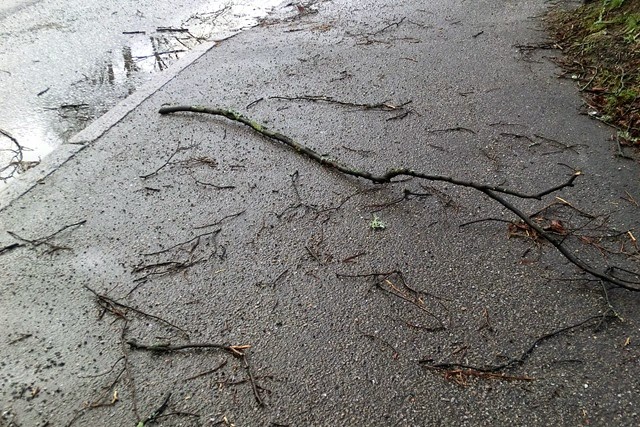 We had a storm passing by yesterday (by name of Svea, which is the ‘name of the day’ for 2nd January in our calendar) . I stayed indoors yesterday, but when going out today I could see that the wind had managed to cause a bit of a “mess” even if no major damage just around here. (It also ripped a tarpaulin from the bench on my balcony… But it got stuck against the rail and I heard and saw it and managed to salvage it.)

Trains between here and the coast were cancelled; and one of my guests on New Year’s Eve (who lives on the coast) was one of many who got delayed and had to take a replacement bus instead of the train when going home yesterday (I learned from her sister).

A video on YouTube shows the waves on the coast.
Not as bad as was expected, but still quite impressive: http://youtu.be/5GnU5vv2gW0

PS. For those of you who missed my 1st January post: if you go back to it before 10th January, there’s still a chance to win one of my photo calendars for 2015.

Posted by DawnTreader at 19:35