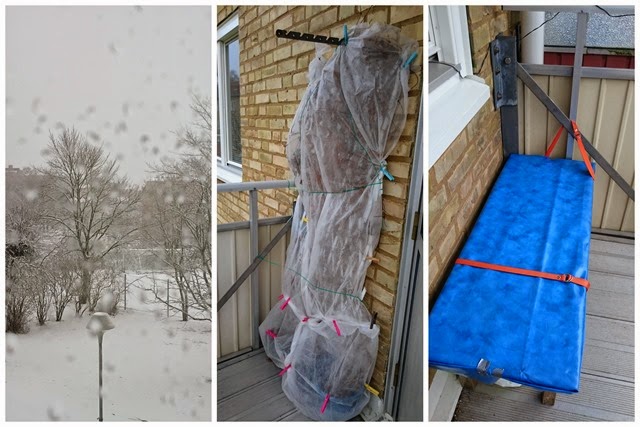 Another winter storm came blowing in over Sweden from the west this weekend. We called it Egon. It caused a bit more trouble around here than the last one (Svea). Where I live it started with snow Saturday morning but turned to rain later as the wind increased.

To keep it personal, while Svea only ripped the tarpaulin off the bench on my balcony, Egon tried to take the whole bench. He did not manage it, as I noticed the attempt and took the bench inside for the night… I’ve put it back out now (after the storm passed on) with an extra safety strap attached to the rail… I might have to try and come up with something better, though. Should perhaps give up and just put it in winter storage in the basement. But the thing is, I’m used to hibernating last year’s strawberry plants under there… (And often succeed, if not too cold!)

I also did my best (or so I thought) already back in autumn to "secure" the trellis with my clematis plants against the winter storms (middle picture). It seems I did a fairly good job with the trellis as such… But, failing to rip that off the wall, Egon managed instead to mischeiveiously turn over one of the three pots (the one closest to the door). It's back in place now, but whether the plant survived or got broken I’ll have to wait until spring to find out!

I also realised this morning that clothes pins are not much use in a storm, so have now also added extra staples to keep the fabric together. And a couple of extra extra extra wires on top of the whole construction. (It will be really interesting to see if anything survives to bloom in the spring…)

I should perhaps add that Egon caused more havoc around the neighbourhood (and indeed the whole south of Sweden) than just playing around on my balcony though. Trees falling over roads and railroads, power outages, flooded quays and cellars on the coast (it reached hurricane force in some places), even roofs blown off a few buildings etc. However, precautions were also taken by cancelling trains and ferries, and closing a couple of big bridges etc, and I don’t think there have been a lot of bodily injuries to people. What’s been reported on the news has been mostly about damage to nature and property.

Meanwhile, at least I have some cheerful budding going on indoors: 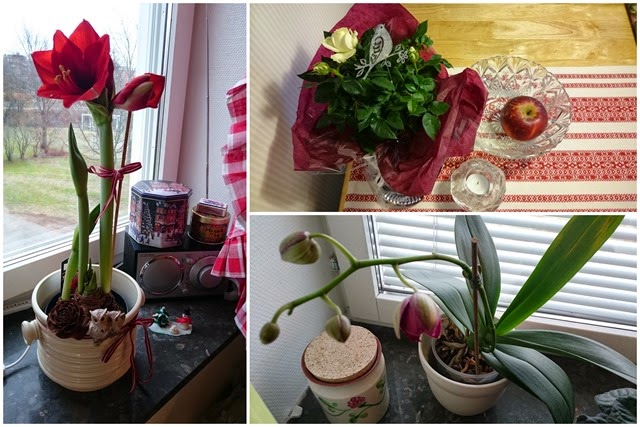 *Amaryllis with three stems (bought before New Year).
*White rose I was given by my New Year Eve guests.
*Purple orchid that has been resting for a while but then decided New Year was a good time to spring some new flowers.

Posted by DawnTreader at 19:01