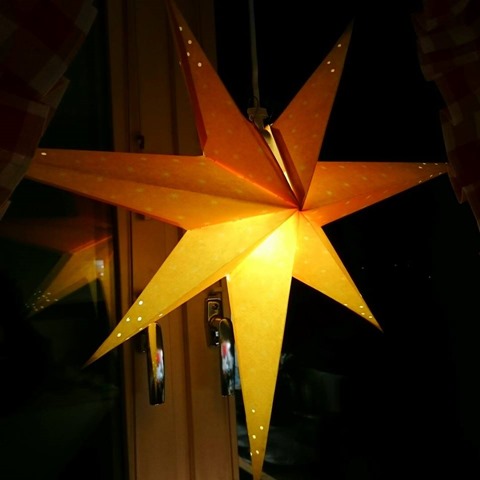 Once upon a time, back in my childhood, the weekend did not begin until Saturday afternoon. I recall going to school on Saturdays in my early school years at least until lunch time. Dad worked Saturdays too, but probably finished a bit earlier as well. (Mum was a housewife - which means she was on duty 24/7, weekend or not!) I don’t know when exactly we got free Saturdays. Some time in the mid/late 1960’s, I think.

I got to thinking about this while putting my Advent decorations up today – i.e. on the Thursday before the first Advent Sunday. Back in the 1960s, this would no doubt have been regarded as serious cheating. But looking out through my windows tonight, I see that I’m not alone in making an early start!

The advent star in my kitchen window is still of the same kind we had in my childhood – a simple paper star, of the same size, shape, pattern and colours as back then. (It’s not the same star, but I’ve been able to find replacements of the same classic kind every now and then through the years. I still have two extras, so they’ll probably last me as long as I’m still able to put one up!) Assuming my parents had one already the very first Christmas season of my life, that makes this my 60th year with that special soft orange glow lighting up the dark December nights for me.

Posted by DawnTreader at 21:50