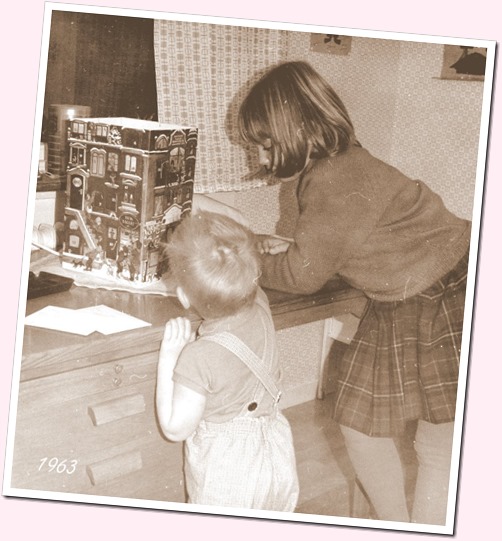 While putting up my decorations for the 1st Advent weekend, I got to thinking about advent calendars.

The one in the photo above is one I remember from childhood; partly because it was of an unusual design which I’ve never seen since; but also, I suppose, because the photo is there in my album to remind me of it! This was the calendar from Swedish Radio in December 1963. It was in the shape of a block of flats, and you were supposed to put a table lamp in the middle of it; so that when you opened the windows, the lamp would light up the pictures from the inside. It was just like looking at a real building from outside on a dark winter night (or early morning). I also vaguely remember that each episode had to do with the different people living in the building. And Swedish Wikipedia helpfully informs me that the title of the series was The Thinking Postman.

Anyway, I was thinking about this and other advent calendars as I pottered about in my kitchen. And one thought led to another, and I then I found myself counting my kitchen cupboard doors and drawers, and arriving at the astonishing consclusion that altogether, I have more than 24 of those in the kitchen alone. Not to mention all other cupboards and wardrobes and drawers around the flat. And on top of that, there are of course all kinds of smaller boxes and books and photo albums and whatnots that can be opened to check what’s inside… Who needs a calendar??

Are you beginning to guess where I’m going with this?

Yes, I’m thinking it might be an interesting Advent Challenge (for myself and for anyone else who might want to tag along) to just open one random door or drawer (or whatever) every day until Christmas, and each time pick one random thing you find there to blog about. If you ever had an advent calendar, you know that the objects behind those little doors can be absolutely anything at all. But I think that most things we own tend to have memories of some kind attached. If they don’t, they usually raise questions instead! (Like “why do I have this, when did I get it and what is one supposed to do with it?”)

No 24-days commitment required (I might not even be able to live up to that myself) and I’m not setting up any special linksite. (You may link in the comment section if you wish.) For myself I’m just hoping to find some inspiration and a good excuse to write about random things for no reason...