A Classic Swedish Trilogy: The Ring of the Löwenskölds

The General's Ring or The Löwensköld Ring is the first novel in a trilogy written by the Swedish writer Selma Lagerlöf (1858-1940) (the first female writer to win the Nobel Prize in Literature, 1909). (The photo above shows a statue of her.) The Löwensköld Ring (1925) was followed by Charlotte Löwensköld (1925) and Anna Svärd (1928). I listened to the first book (in Swedish) back in October 2017, and the following two in January/February 2018.

The first book is a kind of ghost story, set in the 18th century; about a ring stolen from a grave, and a curse laid on the family Löwensköld. In the following two novels we meet descendants of that family (and others) from the first book. I felt more engaged in the story and characters in the two later novels, which have less of the supernatural touch. I have to confess that for me, it remained hazy until the very end how the 2nd and 3rd books were really supposed to relate to the first. (Not sure how much that, for me, had to do with three months’ gap between reading the first one and the other two…)

The central male character in the two later novels, set in the mid 19th century or so, is a young assistant vicar, Karl-Arthur – of gentleman background, but not taking much interest in making a “career” for himself in the church. Instead, he’s very set on living a humble life. At the same time, though, he turns out far from a natural when it comes to putting proper humility into practice. When we first get to know him, he’s engaged to Charlotte, a woman of equal social background to himself. But at a certain point in the story he meets Anna, a poor and illiterate peddler woman… Both Charlotte and Anna are strong female characters, each in their own way. These two are not the only women with influence over Karl-Arthur, though; and there are several more twists and turns in the story before the end.

I know these books have been (re)published in English in recent years; not available for Kindle though, from what I can see. But you could try your library, perhaps.

In This Grave Hour by Jaqueline Winspear
(13th in the Maise Dobbs series, 2017)
Read on Kindle.

“Sunday September 3rd 1939.  At the moment Prime Minister Neville Chamberlain broadcasts to the nation Britain’s declaration of war with Germany, a senior Secret Service agent breaks into Maisie Dobbs' flat to await her return. Dr. Francesca Thomas has an urgent assignment for Maisie: to find the killer of a man who escaped occupied Belgium as a boy, some twenty-three years earlier during the Great War.

In a London shadowed by barrage balloons, bomb shelters and the threat of invasion, within days another former Belgian refugee is found murdered.  And as Maisie delves deeper into the killings of the dispossessed from the “last war," a new kind of refugee — an evacuee from London — appears in Maisie's life. The little girl billeted at Maisie’s home in Kent does not, or cannot, speak, and the authorities do not know who the child belongs to or who might have put her on the “Operation Pied Piper” evacuee train.  They know only that her name is Anna.”

As Maisie’s search for the killer escalates, the country braces for what is to come.  Britain is approaching its gravest hour — and Maisie could be nearing a crossroads of her own.”

The first book in the Maise Dobbs series was published in 2003; I read it in 2006, and have followed the series since. My feelings/opinions about them have varied a bit, and somehow I never felt 100% sure how much that had to with each book in itself, vs me being in the right mood for it (or not) when I happened to read it. The previous one in the series (No 12, Journey to Munich), I will probably remember best for its “actual story”; while with some of the others I have felt them to kind of sprawl out too much and the author sometimes seeming unsure whether to focus on the “case” or on Maisie’s personal life (past and present). In This Grave Hour may be another one of those, in some respects. But one thing that Winspear is always good at is the background research and catching the “spirit of the time” in which each story is set. And with Maise having a complex past (growing up as daughter of servants on a big country estate; serving as a nurse in the first world war; and then making a class trip by both her own efforts, education, marriage and inheritance), by now she is very flexible when it comes to fitting into almost any circumstances, and talking to all kinds of people.

The 14th novel in the series is to be published at the end of this month; and no doubt at some point, I’ll read that one as well. 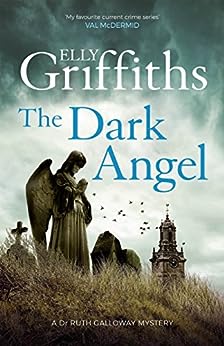 The Dark Angel by Elly Griffiths
(10th in the Ruth Galloway series, 2018)
Read on Kindle.

“Dr Ruth Galloway is flattered when she receives a letter from Italian archaeologist Dr Angelo Morelli, asking for her help. He's discovered a group of bones in a tiny hilltop village near Rome but doesn't know what to make of them. It's years since Ruth has had a holiday, and even a working holiday to Italy is very welcome!

So Ruth travels to Castello degli Angeli, accompanied by her daughter Kate and friend Shona. In the town she finds a baffling Roman mystery and a dark secret involving the war years and the Resistance. To her amazement she also soon finds Harry Nelson, with Cathbad in tow. But there is no time to overcome their mutual shock - the ancient bones spark a modern murder, and Ruth must discover what secrets there are in Castello degli Angeli that someone would kill to protect.”

My favourite mystery series in later years. The main character, Ruth, is a forensic archaeologist; which means that sometimes the police wants her help to determine whether bones are really old or not, and sometimes it is Ruth who has to report finds to the police. (One DCI Nelson in particular…) I read the first book in 2015 – The Crossing Places. I think I just happened to find that one for free or very cheap on Kindle, and as I’m fascinated by archaeology, decided to give it a try. I got immediately trapped and went on to read the next, and the next, and the next… Actually the first seven books one after another, i.e. all that had been published so far… Then I’ve kept reading the following as they’ve been published, one per year.

Until now, the books have all been set in England (mainly Norfolk). In this one, however, Ruth gets to go to Italy to help a colleague. Perhaps not the mystery or setting that has fascinated me the most in this series, but still an enjoyable read. The author also manages to keep the link to England throughout the book, partly by letting some of the other main characters come over to Italy as well; partly by giving the reader glimpses of “meanwhile, back home”…

(Elly Griffiths, by the way, is a pen name. The author’s real name is Domenica de Rosa and she has also written some novels set in Italy under that name. I have not -yet- read any of those, though.) 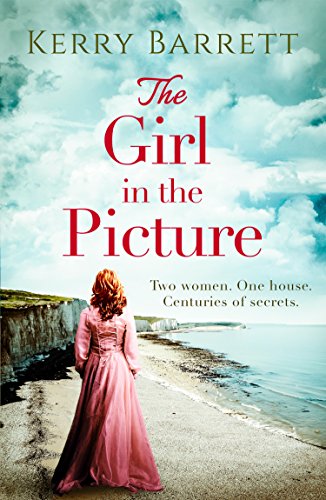 The Girl in the Picture by Kerry Barrett.
(Stand-alone novel, 2017).
Read on Kindle.

Violet Hargreaves is the lonely daughter of a widowed industrialist, and an aspiring Pre-Raphaelite painter. One day, the naïve eighteen-year-old meets the mysterious and handsome Edwin on the beach. He promises her a world beyond the small coastal village she’s trapped in. But after she ignores warnings about Edwin, a chain of terrible events begins to unfold for Violet…

For thriller-writer Ella Daniels, the house on the cliff, where she’s moved with her young family, is the perfect place to overcome writer’s block. But there’s a strange atmosphere that settles once they move in – and Ella’s intrigued when she hears stories of brutal murders in the house next door more than 150 years ago. When Ella uncovers a portrait of a beautiful young girl named Violet Hargreaves, who went missing at the same time as the horrific crimes, she becomes determined to find out what happened. And in trying to lay Violet’s ghost to rest, Ella must face ghosts of her own…

This is a Kindle book I came across for “next to nothing” and decided it might be worth giving it a go. It was. Quite a page-turner; an easy read, but still with enough twists and turns to offer some surprises along the way.

Posted by DawnTreader at 18:15