Yes, it’s been “one of those weeks” – and not only on the political level (see Monday).

On Tuesday I had a dental appointment, with the outcome that I had to book another one for Thursday, for a bigger job… (Just as with the election, I had pretty much expected that to happen, though.)

On Tuesday evening, my TV screen froze. It happened rather late and I assumed it was some temporary transmission problem, so I just turned it off.

Wednesday was Laundry day. One of my projects for this month has been to wash curtains – something I don’t do very often, but after the extremely dry and dusty summer with the windows ajar most of the time, I thought it seemed like a good idea. This week, the turn had come to my blackout curtains from the bedroom. That turned out not to be a good idea. Let’s just say that I’ll be buying new blackout curtains before next spring…! In winter I don’t really need those, though. So for now I have put up a pair of old lace ones. (Not ancient, but definitely the very opposite of blackout.) 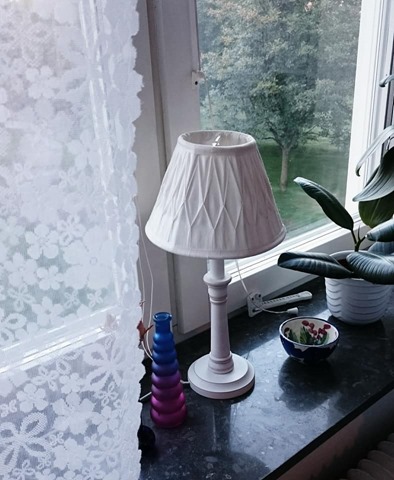 The TV, on the other hand, was still on blackout (now literally showing a black screen). I tried the classic “turn it off and turn it on again” trick with both the receiver and the TV itself, but all I got was the error message above: “Error 2: Could not get an IP address. Please check that your set-top box is correctly connected to the network. If the problem persists, please contact support.” Eh? The internet, also on the fibre cable, was working. So how could there not be an IP-address? My smart-TV was also working with the internet “play” apps; just not with the streaming channels. And “set-top box” – what’s that? What I call the “TV box” was obviously connected to the TV, as its name also came up wíth that cryptic error message. Checking the other end of the cable, there seemed to be nothing wrong there either. So what did they mean with not being “connected to the network”… What network? …

Okay. Problem obviously persisting, time to call support. But… What support?? … I read through various papers and websites again, and arrived at the conclusion that most logically it should be the company I’m paying to provide my TV channels. So I called them, and after the usual round of button-pressing and waiting and so on, at last I got through to a human being. But of course they denied this had anything to do with them; they said I had to call different company, whose role in the chain of technology I have to admit I still don’t get. However, this was about four minutes to six p.m., and that support closed at six… So I had to give up for the day.

On Thursday I had my second dental appointment – preparations for getting a crown on a tooth at the very back of my jaw; and having a rather small jaw + chronic neck problems, that’s a rather exhausting procedure. Almost had a “blackout” when I got back up on my feet (well – felt a bit dizzy, anyway)…

Back home, it took a few hours before I could speak properly again (half my tongue anesthesized along with my jaw). Again it wasn’t until the late afternoon that I felt up for another attempt to deal with the TV problem. But while rummaging through various old instruction papers and brochures, I found a  “TV emergency support” phone number to the housing corporation I’m renting my flat from. I thought that had probably just been a temporary thing in connection with the installation of the new cable, but decided to give it a try. To my surprise, it was still working, and I got immediate help: Besides restarting the TV-box, I should try restarting the main fibre cable box on the wall as well. This hadn’t occurred to me, as the internet (coming out of the same box) was working… The whys and hows are still beyond me, but the main thing is that it did work to follow the local tech guy’s step-by-step instructions: Unplug TV-box. Unplug wall-box. Wait a bit. Plug in wall-box. Plug in TV-box. And voilá!

It’s more for my own benefit than anyone else’s that I’m writing this down… Hoping that if it happens again, I will remember what to do!

As for the national Post-Election situation, that too is still as complicated as that Error message: What? Who?? How??? Re-count of votes still going on but even a slight adjustment of the numbers won’t really make a difference. It’s still a deadlock situation as to who will support whom, or just continue to blame everyone else.

Posted by DawnTreader at 20:15