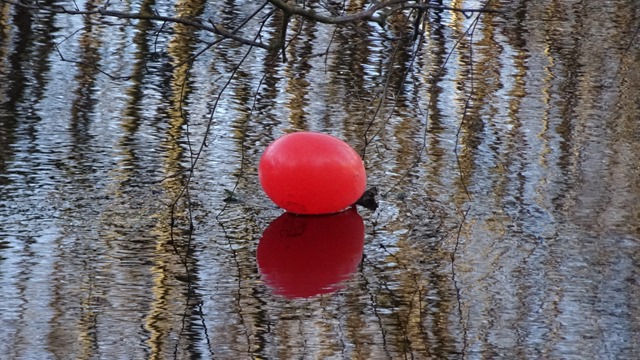 It just Dawned on me that it’s my 10th blogoversay today. I suppose that means I should have thrown a big party here today, with lots of photos and memories from the past ten years… Somehow time seems to have floated away too fast for me today, though; and I got caught up in other things. So I’ll just celebrate rather modestly with this red balloon that I found floating on the river when out on my walk earlier.

After all, as Winne the Pooh says:
“Nobody can be uncheered with a balloon.”
(from Eeyore’s birthday)

I do remember how it all started, though. A penpal in Australia had started a blog, and sent me a link to hers. To be able to comment there, I needed a Blogger account of my own. And once I had created a profile, I thought I might just as well explore a bit more how it all worked… I chose the signature DawnTreader after the ship in one of the Narnia stories; and then I named my “test” blog after one of the islands that they sailed to in that book: The Island of the Voices. I wrote my first post on 5 January, 2009 – The Dawn of a New Year and a New Blog. Two years later, I had (or feared) some technical problems with my account, so decided to start over; and in connection with that I changed the title to Beyond the Lone Islands.  But there is a permanent link to the first blog from the sidebar of this one; and it can still be read. (Maybe I’ll do some more diving into early posts later on during this year and find things I’d forgotten about? We’ll see…)

Anyway… Starting my blog black then really did feel like sailing off into the Great Unknown, and I felt very doubtful if any strangers would ever find me out there in the Cybersea. But some people did; and the most amazing thing about the whole adventure is really that some of you whom I “met” quite early on on my blogging journey are still “here”… And from some of the random contacts with “strangers”, long-lasting friendships have grown. Which is really why I’m still “here”, too!

So here’s to Old and New Friendships,
and a Happy New Blogging Year!

Posted by DawnTreader at 20:59