January has been a good month for staying in and read... So I've decided to divide my books reports for January into at least two posts. Starting here with two that I read on Kindle, and which belong together: 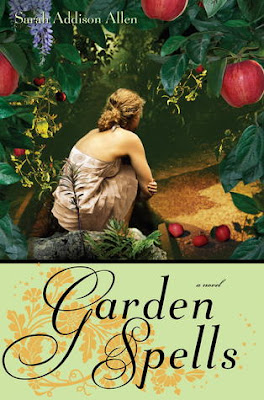 
In the small town of Bascom, North Carolina, the Waverly family has a reputation for having peculiar gifts, bordering on magic.

Claire Waverly, for example – living in the old family house – has a special gift when it comes to using various herbs and flowers for special purposes in cooking and baking; and she uses her skills to set up her own catering business.

However, when it comes to the old apple tree in her garden, she never uses those apples, and does not encourage anyone else to eat them either – even when the tree itself sometimes seems to literally to throw its fruit at people, wanting them to taste it.

Claire's elderly relative Evanelle is known for always giving curious gifts to people – strangers as well as friends. Evanelle herself never knows why, and the recipient never understands it either – until something happens that proves that gift to unexpectedly come in very handy. (And sooner or later, that always happens.)

One day, Claire’s sister Sydney, who left the town back in her rebellious youth, suddenly returns together with her daughter Bay (about five years old); fleeing from a bad relationship. Sydney's return forces the two sisters to deal with their family heritage together; including not only the past and the present, but also the future. And at the centre of it all, there is that mysterious apple tree... 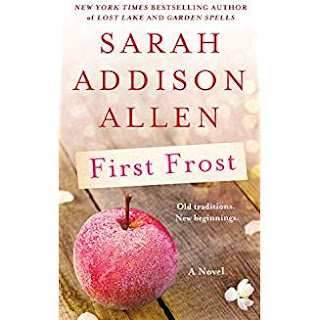 In First Frost, Sarah Addison Allen returns to the story of the Waverly sisters in Garden Spells. The second novel was written a decade or so after the first one; and the author has also let ten years pass in the fictional time.

Both the Waverly sisters are now happily married to husbands that are a lot more down to earth than themselves (i.e. with no supernatural powers). Claire and her husband still live in the old Waverly house, and have a daughter, Mariah. Claire has abandoned her small catering business for making candy, which has become very popular and high in demand – to the point of making Claire's life more stressful than enjoyable these days. Sidney is working at a hair salon; and her daughter Bay (from a previous relationship) is now in her teens and in highschool.
While Bay always had an obvious connection to the Waverly magic (in her case involving a gift for organising, and knowing where things as well as people belong), Claire wonders a bit about her own daughter, Mariah - who so far has shown no signs of special gifts (said to be inherited among the women in the family rather than the men). For a Waverly, Mariah seems very down-to-earth and ”ordinary”, taking after her dad rather than her mum.

The title of the novel, First Frost, again has to do with the magic apple tree. One of its peculiarities is that it starts blooming at first frost, around Halloween, and bears fruit in the winter. When this novel starts, it's early autumn, the tree is bare and waiting to start its season of blossoming. One way or the other, all of the Waverly women (and girls) are also feeling a bit impatient, waiting for change of some kind. And when first frost arrives, that is always cause for celebration in this family.

But as fall approached, the tree would lose its leaves overnight, and then it could do nothing but shake its bare branches miserably until the first frost of the season startled it back awake. The entire family felt its frustration.


One day, a stranger arrives in town... It takes a while before we get to know what he has come for, but of course it turns out relevant for the story.

First Frost reveals more of the Waverly family history and magic than we learned in Garden Spells; but it also repeats a lot of things from the first book. This may be a good thing for anyone who never read that one, or perhaps read it years ago and has forgotten the details in between. But when reading both in one fell swoop, like I did now, I felt it got rather too repetitious at times. (So... I do not really recommend reading them that close together; and the second one probably also works as a stand-alone novel if you wish.)

But apart from the repetitions – and that ”borderline magic” can perhaps sometimes provide a bit too much of an easy way out for an author (even if not always for the characters of the book!) – I found both books an enjoyable read. I think my favourite character is Evanelle. She's still around in the second book, around 90 years old now, and depending on portable oxygen + her younger lodger and friend Fred. But still with that uncanny gift of presenting people with odd gifts without neither herself nor the recipient knowing what for (until it does prove useful after all).


Beneath the ”easy” surface of these books, I think they do also touch on the serious struggles we all have to face now and then through life, finding out and defining where we belong (and with whom), and what our own ”special gifts” may be.

Sarah Addison Allen grew up in Asheville, North Carolina and graduated from the University of North Carolina with a degree in literature. When asked about her writing process she has said; "I start with a loose storyline, then see where it goes". Her books have been translated into 30 languages and sold nearly 2 million copies. She is a New York Times bestselling author and won some other awards as well.

Posted by DawnTreader at 19:25