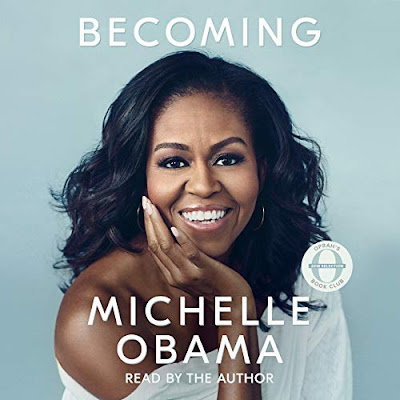 It's not always that the author of a book is also the best person to read it aloud; but in this case I really think it must be. It was not only interesting but also a pleasure to listen to Michelle Obama reading her own autobiography.

The book itself is also very clear and chronological in its structure. It's divided into three major parts: 'Becoming Me', 'Becoming Us' and 'Becoming More'. Basically, the first part is about Michelle's background and family; the second about meeting and marrying her husband; and the third about their time in the White House (primarily from Michelle's own perspective). I found the book well written and interesting, and I think the audio narration enhances that impression even further. I find it very likely that I may want to listen to it again after some time has passed.

Quote from the preface:

”Now I think it's one of the most useless questions an adult can ask a child – What do you want to be when you grow up? As if growing up is finite. As if at some point you become something and that's the end.”

Posted by DawnTreader at 19:02