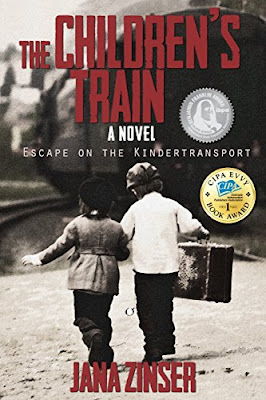 This novel is a work of fiction, but inspired by real events. The story starts in Berlin in November 1938, just before what has become known as the Kristallnacht or the Night of Broken Glass, when violent persecution of Jews broke out across Germany. While the attacks appeared to be unplanned, they were in fact organized. Synagogues were burned, thousands of Jewish businesses were trashed and looted, dozens of Jewish people were killed, and Jewish cemeteries, hospitals, schools, and homes were looted without police and fire brigades intervening. And this was only the start of even worse to follow.

From England, arrangements were made to take Jewish children out of Germany by train to Holland, and from there by ferry across the English Channel to England. Against this background, we are introduced to some (fictional) Jewish families living in Berlin at the time; and especially the children of those families. Some of them do get on a Kindertransport train before the war breaks out (and stops further transports like that). Some of the children did not get on the train, and were left behind. We get to follow both some of those who did make it over to England (separated from their parents), and some of those who did not. Some end up getting sent to concentration camps; one or two manage to dodge the authorities and live ”on the street” and in hiding.

Peter, a shy violin player, and his sister Becca, both make it over to England – but there they are separated. Becca is welcomed by a wealthy family in London, but Peter is sent to a farm in Coventry, and set to hard work there (rather than getting a chance to develop his musical talent). When the Coventry farm is bombed, Peter feels that he has nothing left, and decides to join the Jewish underground resistance – including going back into Germany under cover, and do what he can to actively fight Hitler and the Nazis by partaking in various acts of sabotage.

I found this novel increasingly hard to put down. In some ways I feel that it reads a bit like a screenplay, in the sense that it presents events in a non-stop series of illuminating ”snapshots” rather than long explanations. At first I felt a bit disturbed by fictional place-names also being used instead of real names of some towns and concentration camps in Germany and Poland. But as the story moved along, I could see why the author chose that alternative (giving more freedom for fictional details of the plot). Even if this is a work of fiction, I think it still gives an overall true representation of how things were (compared to true stories I have read/heard/seen before – and I also once visited the Dachau concentration camp memorial site near München).

Because this book focuses primarily on the children, I think it is probably a good book to recommend to young people (not small children, but 'young adults' and upwards). Besides bringing to life the stories and horrors from WWII, the book also inevitably made me think of other wars still going in other parts of the world – and all the refugees arriving ”on our doorstep” here in Europe in the last few years alone. Many of them children, separated from their parents much like the Jewish children in this book – and many of them no doubt also facing similar kind of prejudices as those that preceded the events of WWII.

Posted by DawnTreader at 19:18