Book Review: The Sound of Language 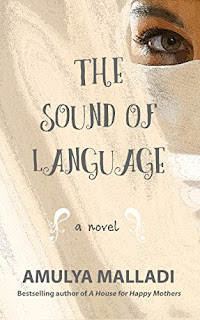 The Sound of Language
by Amulya Malladi (2007)

This is a story about a young woman, Raihana, who comes as refugee to Denmark from Afghanistan, fleeing from the war and chaos in Kabul. In Denmark, she is staying with relatives, a couple with a small child. As is prescribed for all immigrants, she goes to language school to learn Danish. At first, the Danish language sounds to her like the buzzing of bees. But thinking of the sound of bees also stirs up some good childhood memories for Raihana, of visiting an uncle who had a bee farm back in Afghanistan. She finds a new friend in her Danish language teacher, and when in some context Raihana mentions thee bees, the teacher is inspired to help her to get an apprenticeship with a man she knows who keeps bees. This man, Gunnar, is an elderly recent widower. He and his wife started beekeeping as a hobby and enjoyed working with this together. After his wife died, Gunnar has sunk into a state of depression, and doesn't really care much about anything any more – including the bees. However, he reluctantly agrees to have Raihana coming to help him with the bees three days a week.

In the beginning, both of them feel rather skeptical and awkward about the arrangement, and so do their families (Gunnar's daughter-in-law, and the family Raihana is staying with). But they decide to give it a trial period. In the beginning, Gunnar and Raihana don't really communicate much at all, and Raihana doesn't even come into his house (the beehives are outside in the garage). But with time, they get used to each other, and a sort of friendship grows between them. Raihana also finds a beekeeping journal that was kept by Gunnar's wife (Anna), and uses that (with Gunnar's permission) to learn more both about beekeeping, and the Danish language.

The author also uses quotes from Anna's beekeeping journal as introduction to each chapter, subtly indicating certain parallels between the behaviour of bees vs people. Slowly, we also get to know each of the characters in the book better – their strengths as well as their prejudices and weaknesses, and also background stories which perhaps explain why they react and feel like they do.

It's all put to a serious test when violence and persecution towards immigrants shows its ugly face even in Denmark, awakening bad memories for the refugees – but also challenging the local Danish community to take a stand.

I was somewhat surprised to learn from the Afterword in the book that the author is neither Afghan nor a beekeeper herself. (So the background story in the book must have involved quite a lot of research.) Amulya Malladi was born 1974 in India, studied electronic engineering and journalism in the US, lived for several years in Copenhagen (Denmark), and has written seven novels. Her books have been translated into several languages, including Dutch, German, Spanish, Danish, Romanian, Serbian, and Tamil.

I liked the book because although I was never under the pressure of being a refugee seeking a new life in a foreign country, I do recognize the difficulties (and joys!) involved in learning foreign languages. Moreover, as Denmark and Sweden are neighbour countries with a lot in common, I also recognize the social structure and the range of difficulties and fears involved in meetings between immigrants and ”natives” - from both sides! I think the author describes all that very well.

I downloaded this book to my Kindle for free in May 2018. It's no longer free but still quite cheap, if anyone feels tempted.