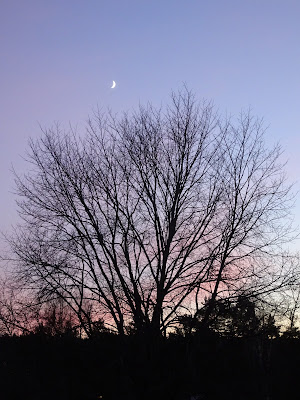 View from my balcony, in the afternoon of New Year's Eve 2019. 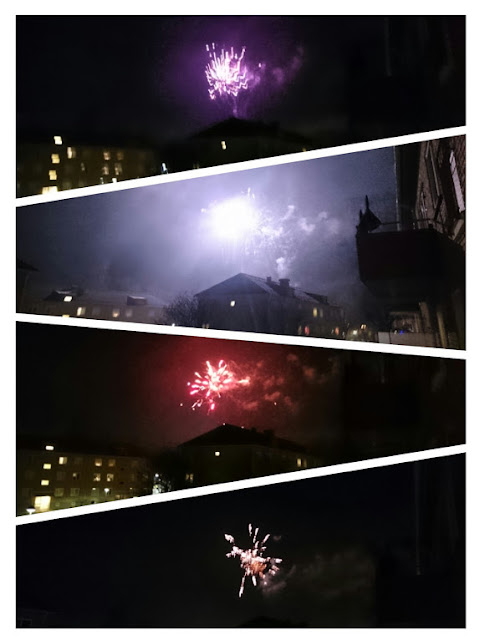 After a generally gloomy, foggy and dark November-December, the very last day of 2019 offered a glimpse of blue sky and sun in the daytime, a sliver of New Moon at sunset, and a perfect clear night sky for New Year fireworks in the evening.

When I woke up this morning, the world outside my windows was once again swept into familiar grey fog, though - with  howling winds to accompany it. I guess 2020 felt a bit like most of us - rather reluctant to get up and get started on the job of clearing up the mess left over from last year!


For the 19th year in a row, I spent New Year's Eve at home, with the same small group of friends as usual. Three of us used to live in the same building, back when it started. One usually has her sister visiting for New Year; and the other now also has her mother staying for Christmas and NY.

I'm borrowing this illustration, because a/ I did not remember to take any photos before midnight, and b/ we're not really the "let's take selfies" kind of crowd anyway...

Part of our tradition is to watch a film. This time, we watched two.

The first was Watership Down, animated classic from 1978 based on the novel by Richard Adams. She who brought it remembered it as good. I recalled thinking the film was not as good as the book. Someone else had read the book, but had not seen the film... Okay, so we watched it. She who brought it kept saying "I don't remember this". (Somehow she had managed to forget all the sad and cruel parts.) Those who hadn't read the book kept wondering who was who (or where or what or why). Myself, I reread the book only a couple of years ago, but most of the time found myself unable to sort out the story line in the film anyway. - At the end, we agreed that the landscape drawings were pretty and the music good... but...

To cheer us up after the rabbit chase, I suggested also watching a Swedish comedy. (Solsidan/The Sunny Side) Everyone knew the main characters in it from a TV series, and it took us through the rest of the evening and gave us some laughs. But we reached the end before midnight, so did not miss out on the drama of also seeing 2019 turn into 2020...