Breathe in, breathe out... 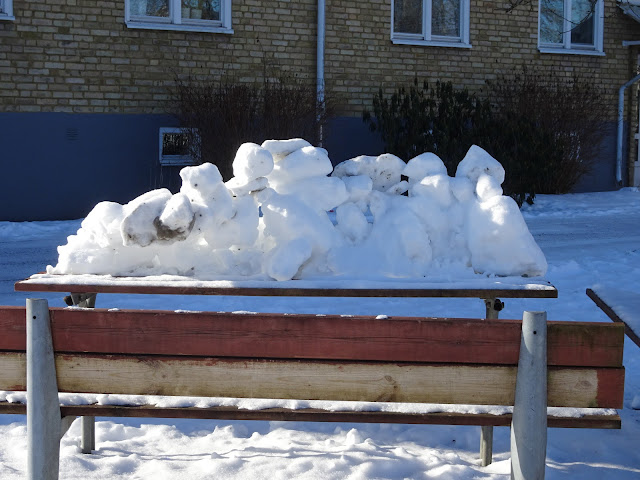 This "snow sculpture" (?) looks to me like a group of too many snowmen standing much too close together...!  I doubt that would have been my first thought one year ago, but now it is. The dreaded virus has messed with our minds as well as our physical health and our whole society (all over the globe) over the past year...

On Wednesday this week I had an appointment at my health care centre (HCC) for a spirometry, a breathing test to do with (in my case) asthma. It was one of the tests ordered back in the autumn by the doctor in charge of my annual checkup (the same one who messed about a bit too much with my blood pressure medication, as some readers might recall). But for this kind of test there was a waiting-list.

I've done it once before, but that was probably about two decades ago, so I can't say it was totally uncalled for to repeat it. Have to admit I was not overjoyed to be summoned in the middle of winter, though - with temperatures around -10°C (14°F)... On the other hand (I argued with myself), spring pollen season might not be better either, for this kind of thing. So I decided it was probably best to just try and get it over with as suggested. Well, at least as long as I did not wake up that day to some really disastrous kind of weather, like a proper snowstorm or something.

The weather situation on Wednesday morning turned out not too bad, though, even if we're still firmly caught in a cold spell. Around -10°C, plus a bit of extra wind chill, and a couple of cm of new snow had fallen on top of the old over night... But it had stopped snowing. And I'd been out walking almost every day in similar conditions over the past couple of weeks, even if not quite all the way into town.

Just going for a walk just now does require some preparation, though: Warm leggings and socks. Other trousers on top of that; and an extra ankle-long warm outdoors skirt on top of that. Three layers of t-shirts and sweaters, and a quilted knee-length hooded winter jacket on top of that. Knitted scarf and hat, warm mittens, and winter boots with studded soles. One of my trekking poles for extra support in tricky places. (On shorter walks just for exercise I often use two, but when going into the city centre that tends to just get complicated. One works as a compromise.) In this case, also a mid-size rucksack. (Because: 1/ there is no cloakroom at the HCC any more - so nowhere to put all the items and layers you have to peel off when getting in! - and 2/ I also had a couple of minor errands to do in town afterwards.)

From my visits to the HCC back in autumn, I knew the corona drill: The entrance doors are locked; to be let in you need to use your mobile to call the receptionist inside and first swear a solemn oath that you have no symptoms of cold. Not all easy to sound totally convincing after half an hour's walk in -10°C! - but they took my word for it. (For my own part I felt I had a clear conscience as I had not met anyone indoors since over two weeks ago, when I was last in town.)

What was new this time was that I was now asked to wear a face mask during my visit. "Okay," said I, "but I won't be able to keep it on the whole time..." The receptionist looked at me suspiciously - until I pointed out what it was I was there for (breathing test). Well, I did wear the mask in the waiting room (although there was only one other person there, sitting at the other end of the room). Most readers of this blog are probably used to wearing masks a lot more frequently than I've had to do so far; but have you tried it combined with glasses, after just having come in from a walk in -10°C?? - I had to take my glasses off, they immediately got all steamy... But without glasses, I don't see anything either! Never mind, I did not have to wait all that long before the nurse came to fetch me.  (She called out my name, and at least my hearing is still good.) For the actual breathing test, I did of course get to take off the face-mask, or it would all have got very strange indeed.

The procedure took around 40 minutes, involving a number of deep inhalations and then exhalations ("as hard as you can, and for as long as you possibly can") into a mouthpiece connected to a computer (immediately turning my efforts into graphs).  First one round without bronchodilator (I had been instructed not to use that kind of medicine for 24 hours before the test); then I got to inhale some doses of that, wait a while, and then a few more rounds. The pauses were used for info and questions etc. The outcome of the test was pretty much as expected (by me), i.e. confirmed that I do have asthma (I've been on medication for thirty years...), but also that the medication I have is probably still sufficient.

A plus was that I also got a chance to consult the nurse about an allergy test (blood test) that was also taken back in the autumn. In all the other chaos back then, I never got the result of that. When I got the letter about the spirometry, I was reminded of that, so requested (via the internet) a copy of what that test had shown, and received a copy of the lab report by letter. That turned out more puzzling than enlightening, though, as the only thing it showed clearly was that I'm allergic to grass (which I've known for around 50 years without any paper to confirm it). However, it said nothing at all about other pollen, like the various early spring trees (which I did discuss with the doctor). On the other hand, the test did show possible sensibility to three kinds of food stuff (likely to indicate cross-reactivity with for example birch pollen; however, confusingly, birch pollen itself seemed not to be included in the test). Food allergies were not mentioned when talking with the doctor back in the autumn. If he had asked about that, I'd have suggested a couple of other things rather than those three included now. So now my head is full of questions, like: Why I was tested for things that seem random to me, but not those that to me would seem relevant? Or was I actually tested for more things but they don't show up in the results because they showed nothing? And as for those three mentioned that I've not noted reactions to myself - should I now try to avoid those anyway, or what??

The nurse was of the opinion that what's not listed on the lab report, is not likely to have been included in the test at all. So she said she'll add my questions to her notes. But she would not be able to ask the doctor who originally ordered the tests, as he's currently (again) not there... So I suggested she give the results (including questions) to the other doctor who had to step in back in the late autumn when the first one wasn't available either. At least I've seen her once, even if we've had no further contact since she got my BP back on track... (I so miss two previous doctors who used to work there, both of whom knew me well from years back... But those two are both retired now; and since then it's been a new one at every checkup...)

Remains to be seen if anyone gets back to me to this time, without me having to call and ask again. (The nurses I trust; the doctors not so much!)

It's another sunny afternoon just now, and I think time to get dressed for a another winter walk. But this time, just to get out and breathe a bit!

Posted by DawnTreader at 13:31