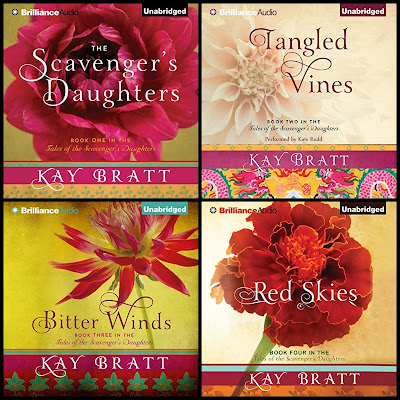 
Back in November, I read a book entitled The Palest Ink (reviewed here) without knowing that it was a prequel to a series: The Scavenger's Daughters. When I found out, I went in search of the those as well - and was happy to find all four as cheap double-deals for Kindle+Audible. (If that's still the case, I don't know.)

The Palest Ink told the story of the hardships Benfu went through back in the days of the cultural revolution in China. Born to a wealthy family, he was sent to a re-education camp.

In The Scavenger's Daughters (also previously mentioned by me here, as read in January) we meet Benfu and his wife Calla Lily many years later (modern times), as ageing foster parents to a large number of orphaned/ abandoned girls over the years, whom in spite of their own poverty they have kept taking in to bring up as their own daughters. (Benfu is a scavenger in a double sense: He collects - and finds value in - things that other people have thrown away. But he also collects children who have been discarded by others.)

In book 2, Tangled Vines, we learn about how Benfu and his wife once upon a time (before they became foster parents) lost their own (biological) little daughter. She was stolen from them, and in spite of many efforts to find her, they never learned what happened to her. This is a multi-layered story which also deals with problems like child trafficking, domestic abuse and the difficulties for single mothers, among other things.

In book 3, Bitter Winds, the focus is on two of the girls who are twins. One of them is blind, the other is not. They both depend on each other, but in different ways. And when the blind twin (a promising violinist) tries to get more independent and to find her own way to make a living, she ends up in a very complicated situation - including getting arrested, and sent to a mental hospital. Again, there's more than one layer to the story.

In book 4, Red Skies, we meet an older daughter, Mari, who has moved out and is married, but she and her husband have no children. They are also struggling to make a living, by offering tourists to be photographed with an old camel of theirs (rather stubborn and unwilling!) next to the Great Wall. When Mari's husband gets sick, she has to try and manage everything by herself, and runs into even more problems. But she also happens to run into Max, an American photojournalist (with his own troubled past). And in another part of town, there is a little girl living on the street, longing for a family, but soon with even more troubles to face her... Again, a story with multiple layers, and not really self-evident how it will all fit together in the end.

All in all, I'm very impressed with this writer, whom I'd never heard of until I happened to come across the first book by chance. All the books are written with so much passion and love, as well as good plots and interesting background. I still think that each one of the books will also work well to read as a stand-alone. (But like me, you might still end up wanting to read the others as well...)

I also very much liked the audio narrations - the first one read by a male voice (Will Damron, who also read The Palest Ink) and the next three by a female voice (Kate Rudd).