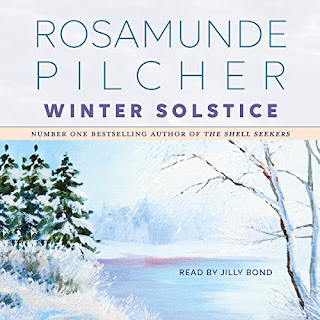 This is an audio book I choose as "extra" in a 2-for-1 sale at Audible (from a limited number of titles).  I read another book by the same author last summer, entitled Coming Home, which I mentioned in a post entitled Home Sweet Home. I expected this one to be kind of similar - and it kind of was. It's a story without major drama, but involving a number of characters brought together by various circumstances, who end up spending the winter holiday together in an old house up in Scotland. The characters are introduced one at a time, each with their own background story told from their own perspective. As their stories partially overlap, we get to hear some events over again from different angles. I remember thinking sometimes that if I had read it in print, I might have found that narrative perspective a bit too repetitious; but when listening to an audio book, repetition can actually sometimes be an advantage. (Especially if like me, you're in the habit of often listening at bedtime...) A few weeks after finishing it, I've forgotten most of the names and details, but it still leaves me with some "images" in my head - a bit like if I'd seen it as a Christmas movie rather than read it as a book.

My first choice in that same 2-for-1 sale was: 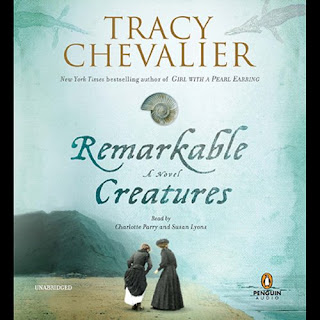 I have read and reviewed this book before, back in 2013. Back then I borrowed it in Swedish, and I've thought several times since then that I'd like to reread it again in English. Now I have, and I still find it just as fascinating as the first time. It's based on real people and events. The main character Mary Anning lived in the coastal town Lyme Regis in England in the early 1800's. Her father died when she was 11, and she and her brother used to search the beaches for small fossils to sell as souvenirs to tourists to earn some money. And one day, they found something much bigger... See more in my previous review. 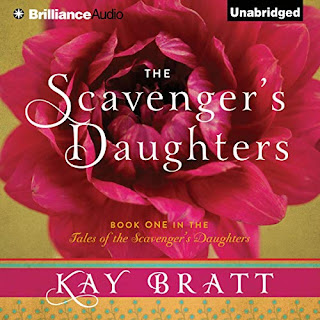 The Scavenger's Daughters by Kay Bratt

In a recent post Read in Nov/Dec 2020, I reviewed another book by this author, entitled The Palest Ink, set in China in the 1960s, during the cultural revolution. I read that one as a stand-alone novel, but then found out that it was written as a "prequel" to a series set in more recent years. So I got curious and looked up that series - and when I found those too available cheap for both Kindle and Audible, I decided to buy the whole series (four books).

"Coming of age during China’s Cultural Revolution, Benfu survived the cruel years, but he did not emerge unscathed. The Scavenger’s Daughters is the story of Benfu and his beloved wife Calli, chronicling their attempts to build a life in the turmoil and aftermath of Maoist China. At the heart of their struggle lies the pain of losing their only child. To fill the terrible hole in their lives, they take in abandoned girls - the unwanted "weeds" - as their own, lovingly caring for them as flowers in a garden. Linnea, the oldest of the scavenger’s daughters, embarks on a struggle of her own, as she falls in love with the son of a wealthy family. - Inspired by a true story, this poetic tale of modern-day China chronicles Benfu and Calli as they turn their path of hardship into a beautiful field of flowers."

I found this book just as fascinating, and full of love and hope in spite of a very dark background. Again I would say that this book too works very well as a stand-alone novel. In spite of that, I still felt I wanted to move straight on to the next one - Tangled Vines. (Which I haven't quite finished yet, but I'm liking that one as well.)

Checking out the author's website I find that she has written several more books, and apparently also knows what she's writing about:  "As a child advocate, she spent a number of years volunteering in a Chinese orphanage, as well as provided assistance for several nonprofit organizations that support children in China ---. In the USA, she actively served as a Court Appointed Special Advocate (CASA) for abused and neglected children ---. She’s traveled to Mexico, Thailand, Malaysia, China, Philippines, Central America, Bahamas, and Australia.---" 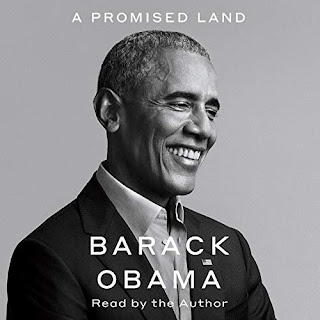 (I've still got around ~7 hours left to listen to)

I started listening to this book while the latest election in the US was still going on, and that I have to say was a weird experience - switching between Trump on the news one minute, and then back to Obama's book the next... The difference in their attitudes just struck me as "ginormous"...

I'm not a very political person, and I'm sure there's a lot lacking in my understanding both of the political system in other countries (including the U.S.), and of international interaction and diplomacy. So a lot of things in a book like this are likely to go over my head.  I'm still finding it worth while listening to, though. And the main impression I think I will take with me is how Obama, through everything, seems to "see" people that he meets and works with and interacts with in various way. His focus is on the work, not on himself. Every step of the way, he seems deeply aware of others, each in their own way, being as important as himself to make things work, and to get things done.

Two quotes that I stopped and rewound to jot down:

"This, I was coming to realize, was the nature of the presidency: sometimes your most important work involved the stuff nobody noticed." (Ch 16)

And from when he received the Nobel Peace Prize:

"I couldn't help but think of the daily fighting that continued... in Afghanistan, and all the cruelty and suffering and injustice that my administration had barely begun to deal with. The idea that I or any one person could bring order to such chaos seemed laughable. On some level the crowd below was cheering an illusion. And yet, in the flickering of those candles, I saw something else: I saw a reflection of the spirit of a million people around the world ... all those refusing to give up the idea that life could be better ... Whatever you do won't be enough, I heard their voices say - but try anyway."