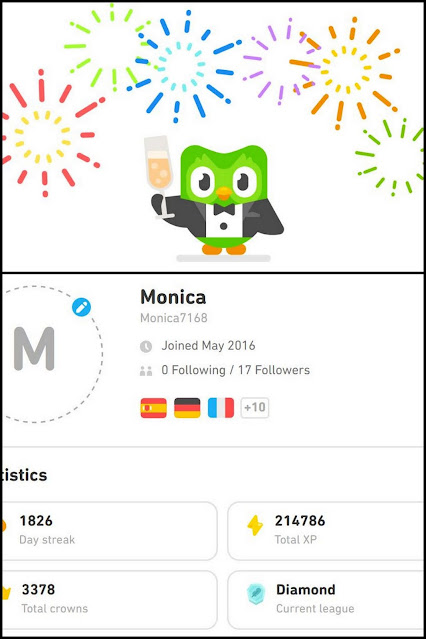 You who have followed me through these five years know that along the way, I have also dipped into several other languages - some for repetition (German, French), some because they were already somewhat familiar (Norwegian, Danish, Dutch); and some just as a challenge to see how the brain would cope with something totally different (Welsh, Turkish, Russian). My latest addition to the last group is Finnish, which was introduced on Duolingo last summer. (Although Finland is a neighbouring country, Finnish is of totally different structure/origin than Swedish.) While I'm unlikely to ever learn enough of any of those last four languages to be of much use in direct communication, I still feel it's taught me a fair bit about languages in general. And I do feel rather proud of myself for having kept up my "streak" of daily Spanish lessons (+ more) through five whole years now . I would not have dared guess that when I started!
Posted by DawnTreader at 20:30