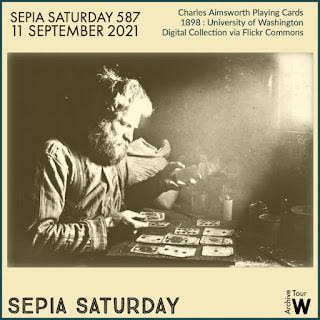 This Sepia Saturday prompt of a man playing cards evoked memories for me. We used to play cards and board games quite a lot in my family when I was growing up. This was way back before the digital era, when there also weren't more than one or two TV channels to watch. But we quite often played games later in life too, when my brother and I were visiting our parents for a weekend, or during the Christmas holidays etc.

But would I be able to find any photo in my own albums to support those memories?  Offhand, I could not recall any.  I suppose that back then, one usually got too caught up in the game itself. (Unlike now, when one constantly seems to have at the back of one's head to also snap a photo of whatever one is doing for posting on social media!)

I decided to randomly pick an album from my teens and have a look, though - and didn't actually have to search long before I came across this photo, from around Christmas 1971. 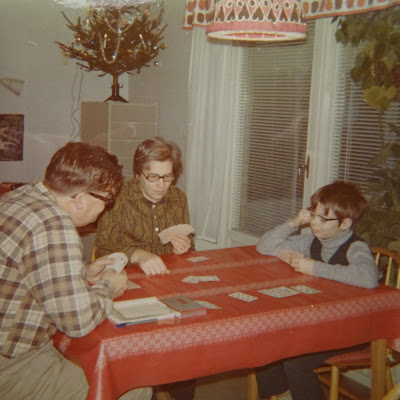 Above: The faded colour photo as it looks in my photo album - 50 years later.
Below: An attempt to digitally adjust contrast and colour a bit. 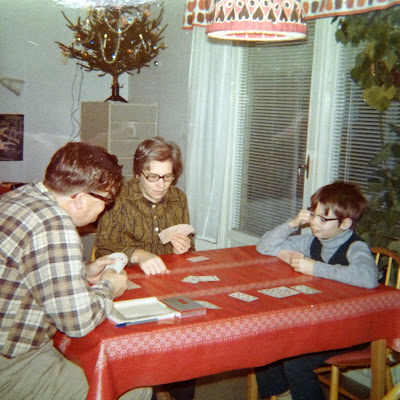 I rarely play cards nowadays (actually can't recall when I last did!), and can't say what game they (or we) were playing here. Maybe I was done with my part in it, and that was what made me go and fetch the camera? Anyway, we're at the kitchen table in our house, where we lived back then. There's a small Christmas tree in the background (we had a full size tree in the living room), and a red 'Christmas' plastic cloth on the table. (From spring through autumn, the table cloth and curtain were yellow. The seasonal change of colour scheme in the kitchen is a tradition I still practice in my own home.)

I recall that one game we used to play was Canasta. I don't remember the rules now, only that I preferred that to Bridge, which at some point dad tried to teach us as well. (There was too much afterward analysis and argument involved in bridge for my liking.)

Posted by DawnTreader at 13:17