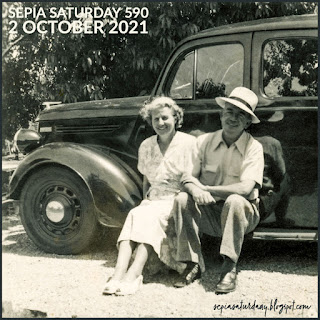 Above: The prompt picture for Sepia Saturday 590 -
"a photograph of a couple sat on the running board of a car"

My mind went searching for memories of photos of cars in my family albums, and the first (and oldest) that came to mind was this one, from one of my grandmother's albums: 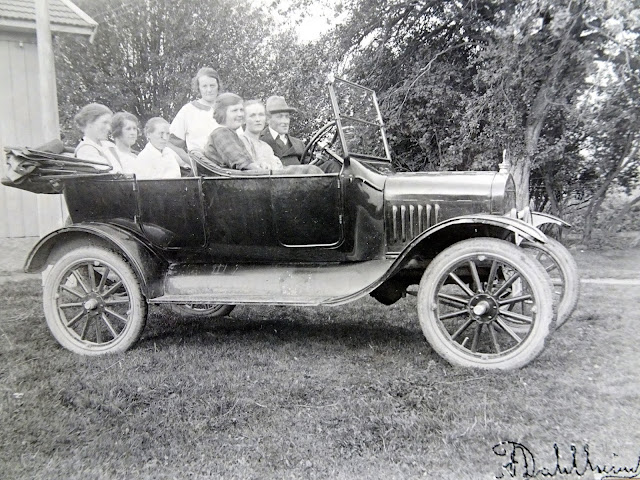 It's a black & white photo in the album, but I think it comes out even better in sepia: 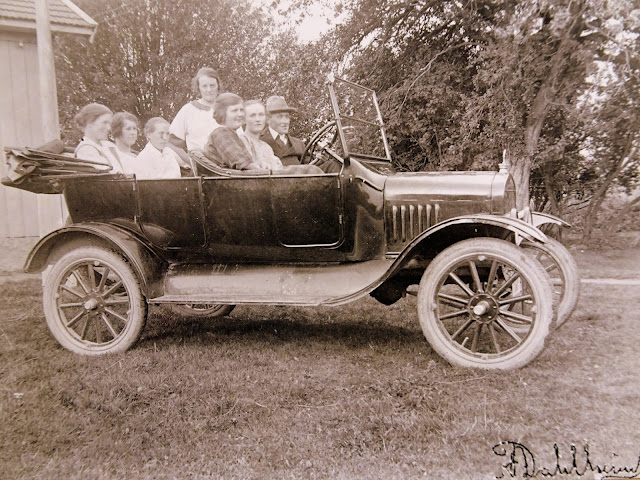 My grandmother's note below the photo only says "old Ford visiting" [at the farm where she grew up and lived until 1930, when she got married], but nothing about who the people in that car were. I would date the photo to the late 1920s. My grandmother is the young woman in the dark dress in the front seat, closest to the camera. I don't recognize any of the others. The photo is signed by a photographer whose name is also unknown to me.

Next, I wondered if I might have a photo somewhere of my parents', or dad's, first car. I found two blurry ones in mum's photo album, from shortly after she and dad got married, in the summer of 1954. They called the car Patrick. 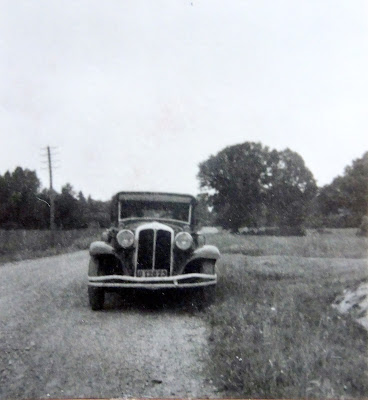 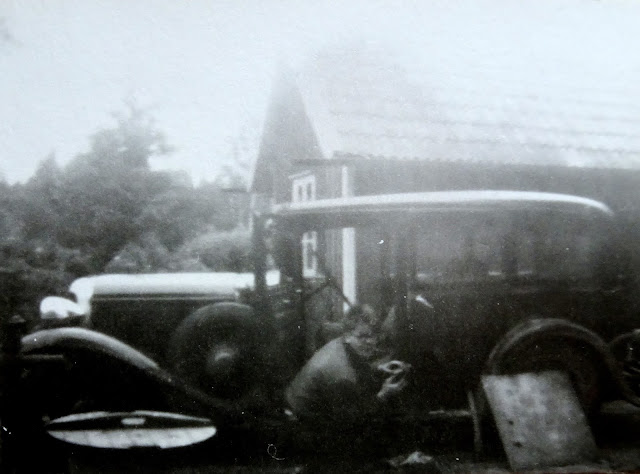 I'm not sure I ever met Patrick myself; I think he was exchanged for a slightly more modern Volvo around the time I was born (1955), or not very long after.

However, even if perhaps I never travelled in Patrick myself, I still remember him as spoken of by my parents; and also as a "character" in a small picture story book that my mum made during her first year/s as a young teacher in a countryside school, while she and dad were dating. She hand-made a few picture books for the children she taught back then, because there wasn't much of a library available (or at least not that kind of books). That was some years before I was born; but she kept those books, and took them out to show me sometimes when I was little - and I still have them. 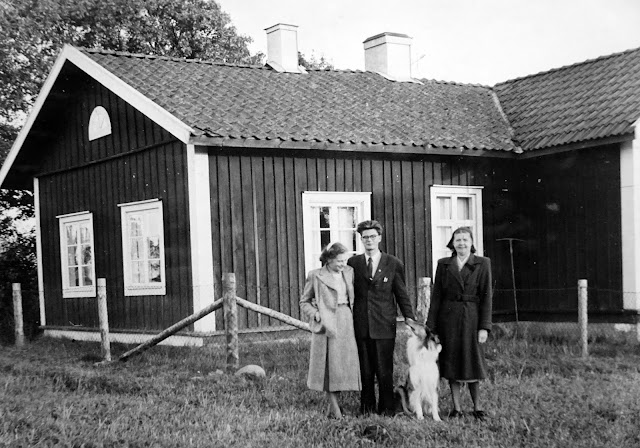 This is a photo taken outside that school house in 1952, when my dad and his parents came to visit. It shows mum, dad, my grandmother (dad's mum), and my grandparents' dog Zepp, a collie. I assume my grandfather took the photo (he usually did). 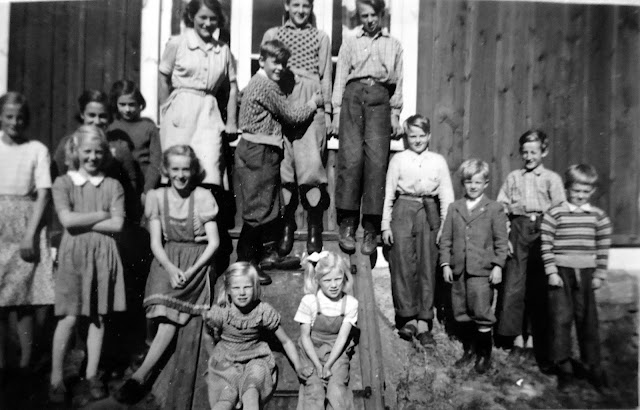 The children my mum was teaching at that school in 1952.

And here are the pictures from the book "Bumse and Patrik"; 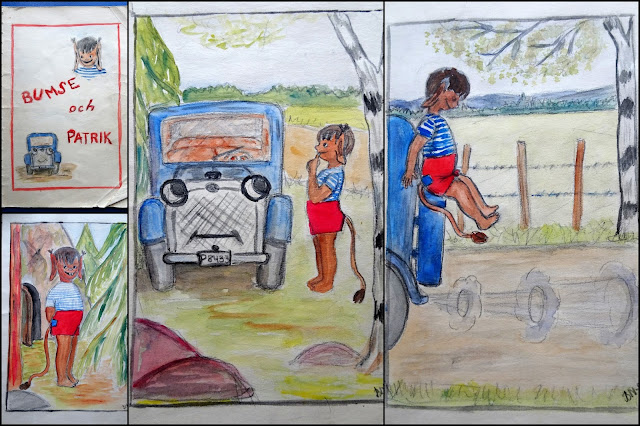 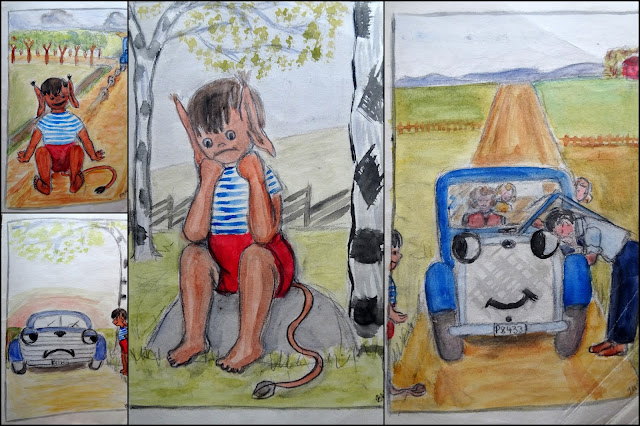 The book (7 handwritten pages) is in Swedish, but here is a summary for you:

Bumse, a young troll living in the forest, decided to go off seeking adventure. When he got out to a road, he came upon a car parked there. He had never seen a car before, so didn't know what it was. He started talking it, and the car, Patrick, offered him a ride. He could jump up at the back, Patrick said, after the family he was driving had got in, and then they wouldn't see him. But after a while, excited by the adventure, Bumse forgot to hold on - and  fell off. He did not know where he was, or what to do. Another car came driving in the opposite direction, and Bumse asked it if he could get a ride back. But that car (it's name was Dollar Grin) just answered "No lift" (in English!). Just as the little troll was getting very worried about how to get home again, he heard another car nearby coughing and stopping, and a man's voice saying "I can't understand why it stopped". Bumse crept up to have a look - and found Patrick standing there, blinking at him.  "I thought it must be around here that you fell off," Patrick said. "But hurry up to get back on now - I don't like causing a delay for the family!"

Posted by DawnTreader at 15:34