The 'One and Only' Kindle

Back in October 2012, I bought my first Kindle e-book reader: A 'Kindle Touch', which has kept  serving me faithfully for 11 years by now. But one day last week, I think it was on Thursday, it was suddenly behaving very sluggishly - it took forever just to turn a page, and every now and then it went on auto-restart, but seemed unable to finish the job properly. I also tried to restart it manually a few times, but that did not seem to help either.

As I'd been thinking for a while about perhaps buying a new one anyway - just to get a brighter, 'paper white' display -  I decided that it was probably time to go ahead and do so.

Since a year or so, I know Amazon has also established themselves in Sweden, so I went to the .se website to  check what was on offer there. It turned out they did not have the one called Paperwhite, but they had one just called Kindle (I think "10th generation") - a little simpler (like lower resolution), but otherwise similar, and looking paper white enough to me. It also seemed to be the only kind in stock. So I ordered it, I think this was on Thursday - and got prompt response that it would be delivered on Monday, to my nearest parcel delivery service (= my nearest neighbourhood convenience store).

As soon as I'd got that confirmed, I discovered that my old Kindle had managed to cure itself from whatever it was it had been struggling with, and was back to functioning as well as ever again. I suppose it had  been spying on me and did not like the idea of getting replaced...

I told the Oldie not to worry - as I have almost my whole Kindle library (with hundreds of titles) downloaded and sorted on it, I'll not abandon it but keep it on as 1st Archivist (as long as it's feeling up for that job) while the Newbie's job will be primarily to deal with what I'm currently reading...

Over the weekend, while waiting for my delivery, I visited amazon.com for some comparative research. To my surprise, I found that there, every kind of Kindle e-reader was marked as either "currently unavailable" or "temporarily out of stock"! Wow. I was beginning to feel very lucky that I had managed to order one at all!

The package arrived yesterday as promised. I had also ordered a special cover for it, and that arrived as well, in a separate package. Also no problems downloading the software and connecting to my account etc - I've just had to spend some time to figure out where to find things etc, as they've made some changes (and hidden some things in different places compared to my old one). 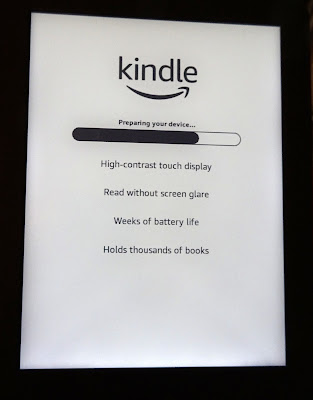 The main difference is the possibility to change the brightness of the display though, and that was what I wanted. (My old one has a grey display, which works comfortably enough in the right light, but can't be adjusted to varying light conditions.)
My new Kindle to the left, the old one to the right: 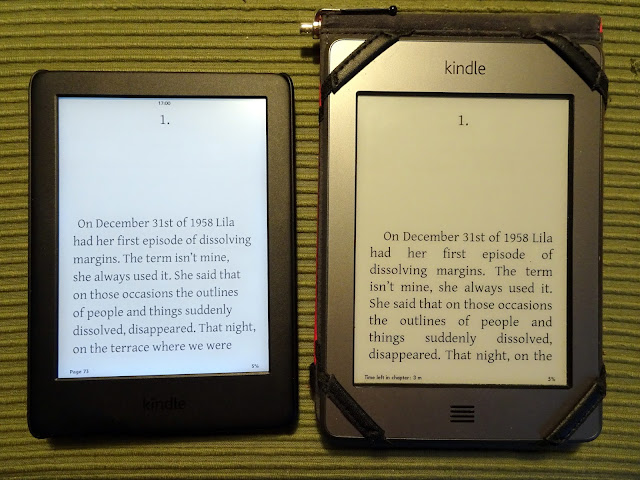 (The book I've recently started reading is Elena Ferrante's Neopolitan Novels (boxed set), which I recently found as a cheap deal for Kindle.) 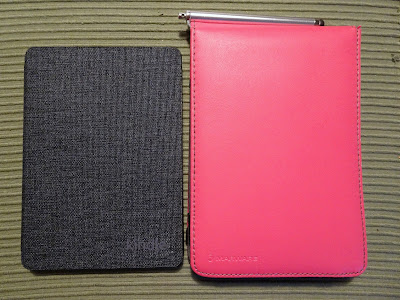 The Oldie has a pink leather cover which flips upward/back (so that it can stand by itself on a table, for example). The Newbie has a grey cloth cover that flips open like a book, but on the other hand it has the ability to automatically turn off the Kindle when you close the cover - and when you next open it, the Kindle also opens automatically to the last thing you were reading. (Again, this was the only cover available for that model, so I just bought it...)

What's giving me the most headache at the moment is trying to sync my book "collections" between different devices (also including my computer, my phone and my tablet). That's a total mess, because when I tried to do that, old collections that I thought were long ago deleted and replaced, also turned up again... Ah well. It's mostly a problem with all the free titles by unknown authors that I never yet found time to read. I now have no idea in what category some of those belong... (My old Kindle, the Archivist, is probably still the one who knows best.)

Today, I went back to the Swedish Amazon website to check something... Guess what? Now they too seem to have no Kindle e-readers at all in stock. Did I manage to get the last one in the world??