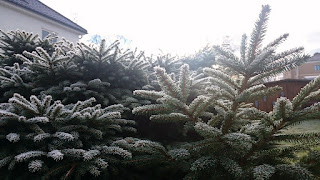 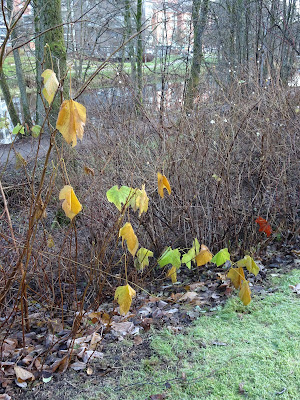 I don't usually write much about politics (I think) - but sometimes it's hard to completely ignore it. Especially when it's probably making the headlines in world-wide news anyway...

Like today, when Sweden elected its first female Prime Minister ever in the morning, but she had to hand in her resignation the same afternoon.

Some of you might vaguely recall that we had a bit of a political crisis in Sweden back in the summer as well, caused by a no-confidence vote against our prime minister, Stefan Löfven.  I wrote a little bit about that too, in a July post I called Rose Gardens and Politics. (This time of year, I'm more inclined to use images of frost and thaw, which is what the weather has offered this week).

Löfven survived the summer crisis, and was reinstated as PM. However, in the autumn he decided to retire as party leader for the Social Democrats (and thereby also as PM) and let someone else take over before next year's elections. At the Social Democrats' party congress, our Minister of Finance since 7 years, Magdalena Andersson, was elected his successor as party leader. According to standard procedure, to also replace him as Prime Minister, that had to also be passed through the Parliament, though.

After the previous election three years ago (also followed by weeks of chaos) we ended up a minority government consisting of the Social Democrats + the Green Party, with background support by the Center Party and the Liberals (and, somewhat taken for granted, also the Left). After the summer crisis (partly caused by the Left getting tired of being taken for granted), the Liberals dropped out of the cooperation, and after that, the government has been juggling separate negotiations with the Left and Center parties (separate, because the Center party refuses to negotiate with the Left).

This morning, however, the vote in the Parliament was successful for Magdalena Andersson, and she was elected (by one vote) our first female Prime Minister, after the Center as well as the Left decided to "tolerate" her as PM.

Nothing lasts long these days, though... The same afternoon, the Parliament also had to vote about next year's budget. This turned things upside down once more, because here the Center decided to vote against the government's budget, and for the alternative produced by the four "right-wing" parties (including the far-right Sweden Democrats, with whom the Center has previously always refused to cooperate or negotiate in any way).

The newly elected PM declared herself prepared to deal with the adjusted budget, for the short period of time left until the next election (next autumn).

However, the Green Party then suddenly decided that they could not deal with the changed budget... and announced that although they'll still tolerate Magdalena Andersson as PM, they will no longer be part of the government.

With one of the parties leaving the government, the procedure of electing PM (now for a one-party minority government) will have to be repeated. So our first female PM had to hand in her resignation only a few hours after having been elected (and before having been officially instated, a ceremony that was planned for Friday this week). She's declared herself willing to give the procedure another go, though - hoping that the votes in her favour will still be the same as today. (The result still hangs on one single vote, though - and considering all the turmoil today, who knows...)

Writing this, I don't know yet when the second voting in the Parliament will take place.

Meanwhile... Stefan Löfven is still acting PM in the transitional government, and will have to wait a while yet to retire.

(Do I have an opinion about it all? Sort of. I hope M.A. gets the chance again, partly because there seems to be no real alternative at the moment, and partly because so far, she also seems able to keep her cool in chaos.)

Posted by DawnTreader at 22:23