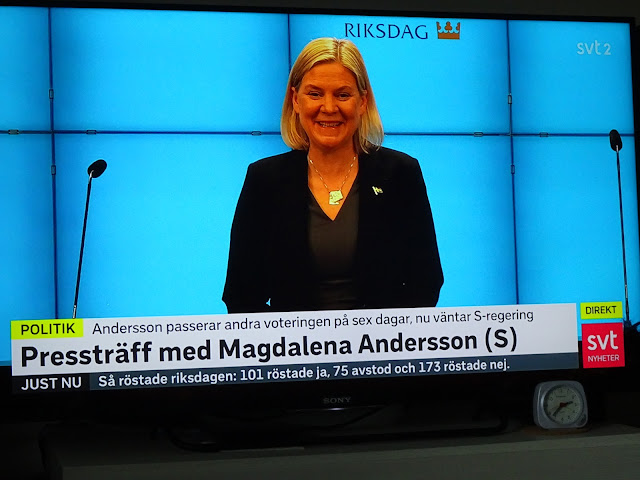 UPDATE: After last week's political turmoil, Magdalena Andersson (new party leader for the Social Democrats in Sweden since a couple of weeks) was given a second chance in a new parliament voting today, and was elected our new Prime Minister, and the first woman on that post in Sweden.

Until the next general election in September 2022, she'll be leading a one-party minority government. (The former coalition partner the Green party having jumped ship last week.)

If anyone is wondering about the numbers, what was required was no more than 174 members of parliament voting against her. 101 voted yes, 75 abstained, and 173 voted no.

Tomorrow she will present her new government (ministers), and be officially inaugurated.

It's likely to continue to be a bumpy road ahead, but I wish her luck (and wisdom, and patience). (Having been Minister of Finance for seven years she's not exactly new in the game, though.)

Posted by DawnTreader at 18:03