I've been catching up with three more books in the Lady Hardcastle Mysteries series by T.E. Kinsey. I've previously read Book 1-4 and Book 6. Now I've also read No 5 and 7, plus a short Christmas story, chronologically fitted in between books 3 and 4.

The author T.E. Kinsey grew up in London, studied history at the University of Bristol, and had some other writing jobs before he started writing his own historical murder mysteries.

The first book, set in 1908, introduced Lady Emily Hardcastle, an eccentric widow with a secret past, and her lady's maid Florence (Flo) Armstrong, as they had just moved from London to a small village, hoping for a "quiet life" in the country. (Turning out not quite as quiet as expected.)

With each book we learn more about the duo's adventurous background - which also gradually explains the close bond they've developed between them. Over time they've become more like friends of equal status than mistress and maid. But Florence prefers to still be called lady's maid, rather than for example "companion". For one thing, it gives her the (sometimes) advantage of also moving more freely in the circles of other servants.

Although they're now living in  a seemingly peaceful countryside village, they keep getting involved in various mysteries and murders. And in the midst of that, the author manages to also catch the spirit and 'burning issues' of the times they're living in.

Titles in the series so far:

A Quiet Life in the Country (1)
In the Market for Murder (2) - involving a cattle market
Death Around the Bend (3) - motor racing
Christmas at the Grange (3.5) (short story)
A Picture of Murder (4) - the making of moving pictures
The Burning Issue of the Day (5) - the suffragette movement
Death Beside the Seaside (6) -  holidays at the seaside
The Fatal Flying Affair (7) - aeroplanes 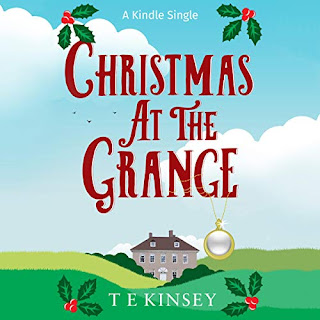 It's Christmas 1909, and for once Lady Hardcastle - respectable gentlewoman, amateur spy - and her lady's maid, Florence Armstrong, are setting sleuthing aside. They are invited to the festivities up at The Grange, as guests of Sir Hector and Lady Farley-Stroud. But barely have corks been popped and parlour games played when a mysterious crime comes to light... The Burning Issue of the Day
A Lady Hardcastle Mystery, Book 5
by T.E. Kinsey (2019)
Audio narration by Elizabeth Knowelden (9:19 h)

January 1910. A journalist has been killed in a suspicious blaze. Everything points to a group of suffragettes, but the apparent culprit insists she is innocent. When Lady Hardcastle receives a letter from a suffragette requesting her urgent help, the retired spy turned sleuth knows only she stands between an accused young woman and the gallows... August 1911. Emily Hardcastle and her inimitable lady’s maid Florence Armstrong are enjoying a fine summer until Harry, Lady H’s brother, turns up out of the blue with a mystery for them to solve. A routine parachute test at a local aeroplane factory has gone horribly wrong - with pilot Dickie Dupree plummeting to his death. Harry is certain there is more to this ‘tragic accident’ than meets the eye ..

Reasons why I'm enjoying this series have to do both with the time period they're set in, and with the relationship (and 'banter') between Lady H and her maid.*

*(Those of you also following my other blog, Greetings from the Past, will remember that over the past decade or so, I've been going through a lot of old postcards written by my grandmother's sister Gerda, who worked as travelling lady's maid around the same time period.)

Posted by DawnTreader at 12:32