BTT: The Book and the Cover

Booking Through Thursday is a weekly meme about books and reading habits. Deb’s question this week is:

They say you can’t judge a book by its cover, but there’s no question that it can make a difference!

What book(s) have your favorite covers? Something that’s perfect for the story, the tone, the colors, the mood…

And did you pick up the book BECAUSE of the cover? Or were you going to read it anyway, and the cover was just serendipitous?

I do agree a book cover can make a difference – especially when one is browsing the shelves of a bookshop or library more or less at random, not in search of a special title. Even on the internet I find the cover picture plays a part in whether a book catches my attention (or not). For the final decision the title and “blurb” probably matter more though.

As for favourite covers, I think the book I own where the cover (and the whole layout and print) matters the most is my German copy of Die unendliche Geschichte (The Never-Ending Story) by Michael Ende: 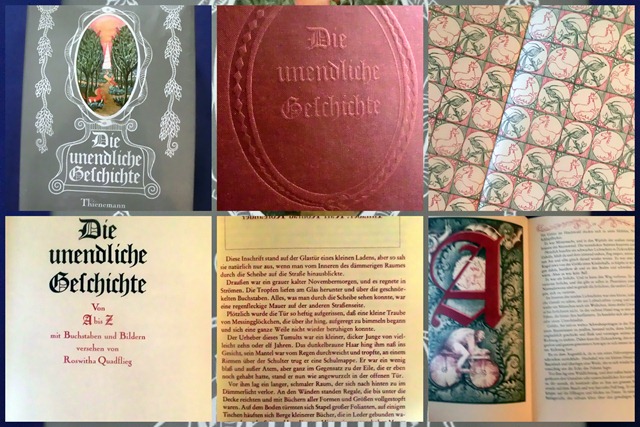 With this book it matters, because the book is made to look like the magic one that the main character within its pages finds, and starts to read, and gets drawn into… The most unusual thing about it is perhaps not really the cover, but the red and green print. When we read about Bastian the text is red, and when we read with Bastian, it shifts to green. I’m sure you can still enjoy a black-and-white version of it, but the colours do add an extra dimension to the reading experience.

I did not buy it just because of the cover though, as I’d already heard of it, and had read and liked Momo by the same author before (in Swedish translation). But I was happy to find this one while I was also studying German at Uni (which encouraged me to actually read it in German rather than in translation).

It’s funny that this book cover question should turn up on BTT this week of all weeks, as I’d just been contemplating a recently read book and its cover. This was a book I did not pick by the cover, but had pre-ordered even before release, because of the author. 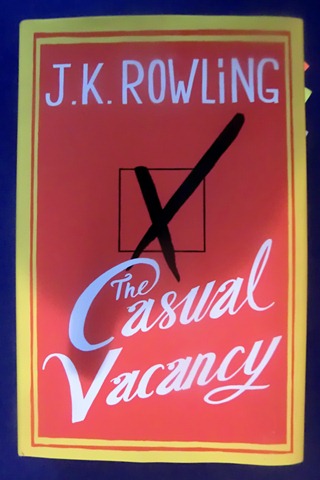 Actually one of my very first thoughts was that had the author been unknown to me, it’s doubtful whether I’d have been drawn to this book by its cover, which seems strangely anonymous.

However, after having finished the book, and contemplating the cover again… It suddenly struck me that oh… but that’s the whole point! The apparently unmeaning book cover actually sums up what the book is all about: That you cannot “judge a book by its cover” - or a person by first impressions…

I did not read any reviews beforehand. I glanced at a few after I’d finished it, though, and found, not surprisingly, that opinions varied quite a bit. First of all, anyone who expected a new Harry Potter (I did not) is bound to be disappointed. Second, yes, I can feel a certain sympathy with parents of (young) Potter-fans who have to try and convince their kids that this new book really isn’t a children’s book. Third, I’m trying to imagine a reading from this book in an American TV-show: “beep-beep-beep-beep”…

Here is the blurb:

When Barry Fairbrother dies in his early forties, the town of Pagford is left in shock. Pagford is, seemingly, an English idyll, with a cobbled maket square, and an ancient abbey, but what lies behind the pretty facade is a town at war.

And the empty seat leaft by Barry on the Parish Council soon becomes the catalyst for the biggest war the town has yet seen. Who will triumph in an election fraught with passion, duplicity and unexpected revelations?

A big novel about a small town, The Casual Vacancy is J.K. Rowling’s first novel for adults. It is the work of a storyteller like no other.

I don’t want to ruin anyone’s reading experience by adding too much about the actual story. It may not be the greatest novel ever written. But one thing that I found kind of refreshing is that Rowling takes her starting point in a natural death, and yet the story goes on with a similar kind of unravelling of secrets as in a typical murder mystery. Remember the classical detective novel, where at the end everyone gathers in the same room, and the detective keeps pointing out one person after another (of those still alive) only to arrive at the conclusion that no… It was not that person who was the killer after all, nor that one, nor that one… but… Well, this is a bit like that – but at the same time, different.

While reading, I was trying to think whose style of writing she comes closest to in this book, and the authors that came most to mind for me – besides herself! – were Ruth Rendell, Elizabeth George and Charles Dickens. (I was often reminded of Dickens when reading the Potter-series as well.)

One or two of the reviews I had a glance at yesterday, after finishing the book, were complaining that they found her description of certain characters too stereo-type, especially the grown-ups. And true, just as in the Potter-books, her strength and sympathy no doubt lies more in her understanding of young people, what formed them as individuals, and how the world appears to them. I suspect the worst stereotypes may well be intentionally exaggerated though – especially on her first introduction of the characters – because she is knowingly playing upon (all) our prejudices and tendencies to judge, put other people in ‘pigeon-holes’, and imagine ourselves safe behind our own facades.

With less than 50 pages left of the ~500, I still could not quite guess the ending.

’They think an artery burst in his brain,’ said Tessa.
’Why did it?’
’He was born with a weakness he didn’t know about,’ said Tessa.

The sky was a cold iron-grey, like the underside of a shield. A sharp breeze lifted the hems of skirts and rattled the leaves on the immature trees; a spiteful, chill wind that sought out your  weakest places, the nape of your neck and your knees, and which denied you the comfort of dreaming, of retreating a little from reality.

For all of Andrew’s life, Simon had been a contented prisoner of his own contempt for other people, making his house a fortress against the world where his will was law, and where his mood constituted the family’s daily weather.

Still the rain fell --- It poured for days and into the nights, and the Square was full of hunchbacks in waterproofs, and umbrellas collided on the narrow pavements.

But who could bear to know which stars were already dead, she thought, blinking up at the night sky; could anybody stand to know that they all were?

Posted by DawnTreader at 16:20