Pursued by the Press 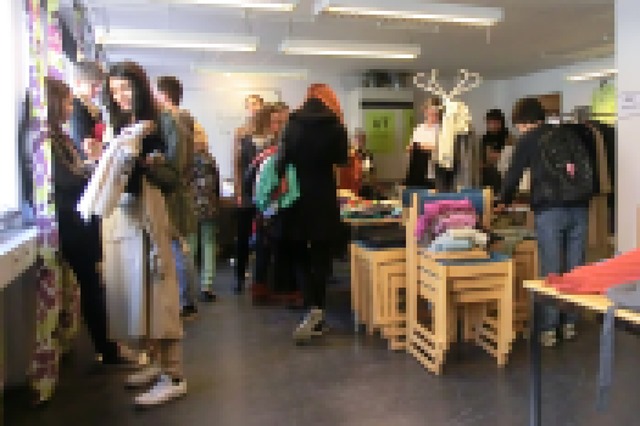 Today was a national Clothes Swapping day in Sweden, arranged nation-wide by the various local branches of the Swedish Society for the Conservation of Nature. I’ve never partaken in one before, but since my wardrobe was in need of some clearing out anyway, I decided to give it a try.

The procedure is simple enough: Hand in (maximum)five items, receive one coupon per item, come back a couple of hours later and use your coupons to “buy” other items. (If you’re as lucky as to find anything you want.)

Arriving at the Swap Place around 10.15, I had hardly entered the room before I was attacked by a reporter from the local radio station, wanting to ask me a few questions. Taken by surprise, I agreed...

Reporter: Why are you here today?
Me: I read about it in the paper and thought why not.
Reporter (expectantly): So, do you do you do a lot of second-hand shopping?
Me: No, I can’t say I do.
Reporter: Do you have a lot of clothes hanging unused in your wardrobe?
Me: Er… Not really.
Reporter (getting a bit desperate now): But you think swapping is a good idea and people ought do it more?
Me: Yes, why not.
Reporter: So are you here mainly to get rid of things or will you be back later hoping to make some finds?
Me: Mainly to hand in a few things. (Taking pity on the reporter, and the possible radio listeners, I added:) But yes, I’ll probably come back and have a look around too.

End of Interview. (I don’t know if it was ever aired… If I’d been the reporter, I think I’d have made an effort to find a more enthusiastic interview subject!)

Coming back to the Swap Place around 1.15 pm. Once again I had hardly entered the room before I found myself approached by another representative of the Press:

Reporter 2: Hello, I come from the local newspaper, I wonder if I may ask you a few questions and take a picture?
Me (horrified): Oh no, please… I’ve already been on the radio this morning, that’s enough for one day…!

Mercifully she went on to someone else - and from what I overheard, had better luck there. (A younger and more experienced second hand-shopper…)

Myself I left within a few minutes, after quickly having established that there was nothing in my size that I was interested in at all. Which did not really matter to me – I was just relieved not to have to pretend that it did! (Frontpage headline: She Gave Away Half Her Wardrobe and Got Nothing in Return!)

PS. Found it best to pixellate my photo before putting it on here, as I did not ask anyone’s permission to take it!