Booking Through Thursday question from Deb

… how do you feel about books about dogs or pets? Fluffy stories of fluffy family members? Solid books on training them or taking care of them? Touching reminiscences of trouble and the way a person’s dog (or pet) has helped get them through? - Any favorite books to recommend?

I have to confess I’m not really a “pet person” myself. For one thing I’m allergic – to both cats and dogs it seems, and probably other fluffy furry pets too (and smelly ones!)  But even before various allergies set in (which was not in my early childhood but in my teens) I was never really crazy about animals. I can’t recall ever craving a pet of my own, nor being seriously envious of those who had them. 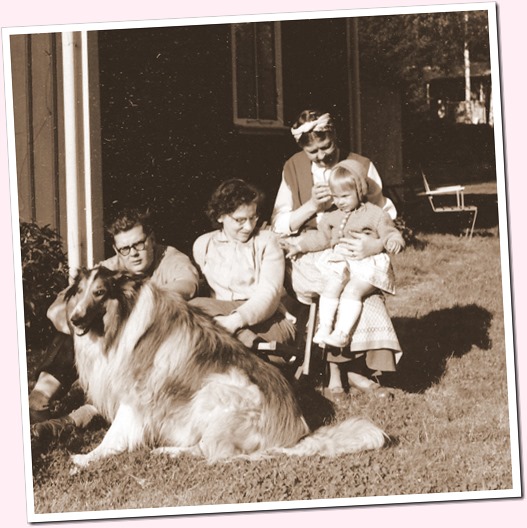 My paternal grandparents had dogs (one at a time). The one which they had when I was little was a big collie, and a often repeated story in the family was that once upon a time someone asked me what I thought of him, and my reply was: “He’s nice but he’s in the way.” Everyone always laughed at that, but it is still my honest opinion… The thing is, he was in the habit of lying across thresholds and I could not get past him! (See photo for proportions!)

Their next dog was smaller, but he was also in the way in that he had the bad habit of jumping up on you (uninvited).

My brother’s dog is small, cute and well-behaved; the trouble is that with the years my allergies have got worse.

But I digress; the question was about books! However, as I was never pet-crazy in real life, I guess it’s only logical that I was never overly so when it comes to books either. Talking/magical animals in children’s books and fairy tales etc is one thing (if it talks, I regard it as a character rather than a pet). But generally speaking, in an ordinary novel I’m more interested in the human characters than in their pets. What I mean is, I don’t usually choose to read (or not to read) a book because there are dogs or cats or horses in it. If there are pets in the book, that’s okay as long as they don’t get in the way of the story!

Posted by DawnTreader at 15:13